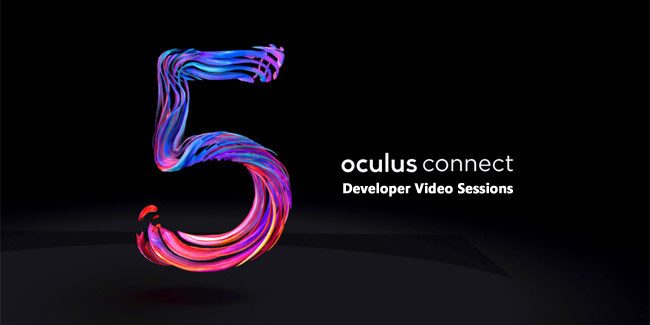 For those not lucky enough to attend Oculus Connect this year, the company recently released a series of developer session videos to watch online, check them out below.

‘Learn how to take your 2D desktop application and make it VR capable with Hybrid Apps.’

Medium and Quill for Prototyping

‘Learn how Medium and Quill are used to prototype assets and previsualize environments for VR experiences. There will be performance demos in VR by Bryant “Momo” Koshu (Archangel: Hellfire) and Martin Nebelong (The Excuse).’

‘The best way to get the real feeling of presence in VR is to share an experience with someone else. In this session, we’ll debunk the myth about how challenging it is to build a multiplayer VR experience. We’ll walk through a Unity sample project step-by-step to help you build with invites and matchmaking, co-ordinated app launch and Avatars, VoIP and P2P networking.’

Evolving Stormland: How Insomniac Draws from the Past

‘Insomniac Games has a long history of making games with smooth gameplay, player empowerment, and open-world freedom. The creators of Ratchet & Clank, Sunset Overdrive, and The Unspoken will share some of the VR-specific gameplay tips and tricks discovered over the course of developing four VR titles that culminate in Stormland’s free-roaming exploration and combat gameplay, as well as how these aspects enrich the player experience in VR.’

‘Storytelling is incalculably ancient, VR is shiny and new. Finding the ideal marriage is a voyage with unexpected turns and the journey is 1% complete. Experimentation yields alchemy and things are always evolving. Shared tribal experiences create emergent narratives.’

Introducing the Manifold RED by Facebook 360: A Look at the Next Generation of Immersive Storytelling

‘Facebook and RED have partnered to build a camera that captures and renders content in six degrees of freedom (6DoF) with incredible fidelity, for a viewing experience in VR that was never possible before. We’ll share the latest details unveiled today on the Manifold RED by Facebook 360, and our partners will join us to discuss how immersive capture and workflow technologies will shape the future of immersive filmmaking.’

The Hierarchy of Being: Embodying Our Virtual Selves

‘How do you design an experience optimized for immersion and make someone feel like they’re there? In this session, we’ll take an interdisciplinary approach to investigate how the body, movement, and presence of others can deliver immersion in virtual reality.’

Building Brand + Community On a Budget

‘Come learn about the unique opportunities available to you as Oculus developers and pick up some tried-and-true best practices while you’re at it. From blogs and asset creation to reddiquette and beyond, we’ll help you put social media and the VR community to work for you—without breaking the bank.’

‘Oculus Lipsync SDK delivers accurate real-time facial animation from audio. This technology is supported across multiple platforms and animates faces across many different languages. We will show you how easy it is to integrate Lipsync into your projects, share our future plans, and discuss recently released features.’

‘Oculus Avatars deliver persistent identity and self-expression users can carry across your apps and games—on and off the Oculus Platform. We’ll cover the latest updates, including our work to boost performance while making integration even easier, and explore the technology behind new advancements that will deliver lively, expressive avatars that you can almost lipread.’

‘We’ve done a lot under the hood to make your apps shine across our mobile platform. Here, you’ll learn how to make the most of Oculus Go and Oculus Quest’s unique performance improvements, and use our diagnostics to debug quality and performance challenges. We’ll walk through these features and show how to identify and avoid common errors to boost performance across Unity, Unreal, and native engines.’

Porting Your App to Oculus Quest

‘The introduction of standalone means the arrival of more approachable devices and, for developers, a broader range of consumers to target. The good news is you’re already ready. A stable of universal techniques and best practices can help reduce draw calls and hit perf without sacrificing fidelity. We’ll start with an overview of the device and basic considerations, and walk step by step through the process of reviewing and optimizing textures, scene geometry, and lighting—including deep dive on engine profiling tools and specific Oculus Quest performance targets.’

‘Get help understanding the Oculus Store’s policies around inappropriate content, review philosophy, and content rating systems, plus hear about our approach to defending against abuse on the platform. With added insight on our stances and the resources available, you’ll benefit from fewer dev cycles and a faster time to ship.’

Accessibility: Build, Influence and Grow Adoption Over the Next 5 Years in VR

‘In order to deliver world-class products, we must build experiences where everyone can enjoy immersive VR. One of the areas that gaming has consistently been focused on is engaging more authentically with the Accessibility Community. VR has the potential to take the learnings from 2D games and expand on that with a higher fidelity of engagement. This panel will explore and share best practices and learnings of how to develop a product that considers a wider set of users with physical, audible and visible challenges.’

‘The PC SDK is the foundation of performant apps and games. This session will cover our latest features and new runtime advances designed to help you boost visual fidelity and performance.’