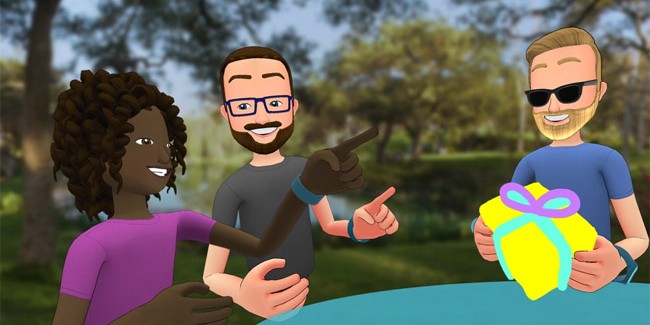 Oculus’ parent-company Facebook announced on Tuesday that it has added cross-platform functionality to its social VR app, Spaces. Now, in addition to the Oculus Rift, you can officially access Facebook Spaces with an HTC Vive headset and hang out with friends on both major platforms.

Facebook Spaces first launched in beta on the Oculus Rift earlier this year, as part of the company’s ambitious goal to bring more social interaction into VR and continue its effort to transform the way people communicate and stay connected with each other around the world.

HTC Vive users can expect to experience all the same features in Facebook Spaces as on the Rift version. You’ll be able to create your own avatar, view Facebook photos and 360 videos, play games, draw with markers, live stream and make Messenger video calls to friends and family—and, of course, take selfies!

“VR is such a powerful way to feel present with the people you care about when you can’t physically be together,” said Rachel Franklin, Head of Social VR at Facebook in the announcement. “With Facebook Spaces, we’ve always been committed to bringing the power of social VR to as many people as possible, across platforms and devices.”

“This is our first expansion onto a new platform, but it’s only the beginning,” Franklin added. “We’re working to bring Facebook Spaces to even more VR platforms and devices in the future, so stay tuned.”

Vive users can head to Facebook’s website to directly download Spaces today, while the version for the Rift is available on the Oculus Store.

Oculus Rift Bundle Gets Discounted to $379 in Time for Christmas