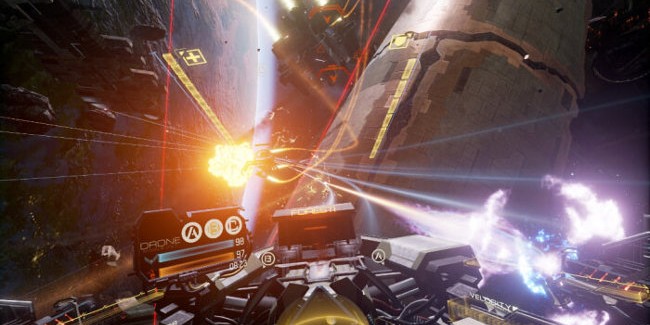 With the Oculus Rift finally shipping to consumers this week, a new trailer for EVE: Valkyrie was released by developer CCP Games. The footage highlights one of the most anticipated games to launch with the Rift featuring its intense space dogfighting action. In fact, those who pre-ordered the Oculus Rift will receive a free copy of EVE: Valkyrie as part of the Founders Pack, which comes with perks like in-games credits, and an exclusive fighter ship.

In an open letter alongside the new trailer, Owen O’Brien, the game’s executive producer, offered some insight to fans into what the studio has planned for EVE: Valkyrie to keep the game fresh with new content and features in the months ahead.

“Over the coming months we plan to release new content and features, maps, games, modes, ships – but exactly what we do and when we’re keeping deliberately fluid,” O’Brien wrote. “One of the challenges of building for a platform that is truly ground-breaking (and not even released yet) is that we don’t know what we don’t know…We have not had huge amounts of existing players to test on nor indeed other games to learn from. We are at the forefront of this technology and by necessity, that means we will make mistakes – but that’s all part of the fun and I would not want to be anywhere else.”

Check out the trailer above. If you haven’t pre-ordered the Oculus Rift before March 28th, expect to pay a retail price of $59.95 for this AAA-quality game.