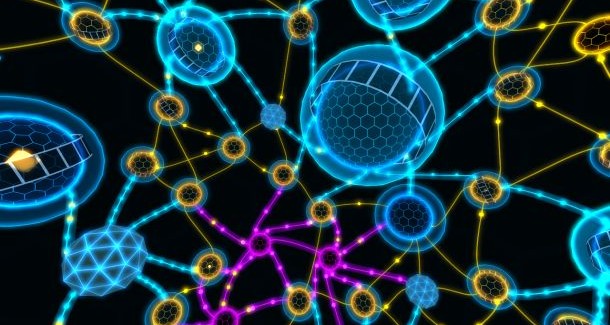 At the 2013 VR Jam hosted by Oculus and IndieCade, developer E McNeill won the Open Call Grand Prize with his game titled Ciess. A game that earned him $10,000 for its unique, simple concept, yet addictive challenging gameplay. The game was based on the inspiration of bringing that cyberpunk hacker fantasy immersion found in such fictional films like Johnny Mnemonic, and The Lawnmower Man. E McNeill proudly announced the follow-up of his award-winning game will be called—Darknet.

Darknet improves and expands upon the original concept of Ciess, where the player must hack into and take over various computer systems while unleashing viruses into different nodes, and breaking through multiple firewall security levels to get to the key data necessary to complete the objective. If you ever wanted to feel like a “futuristic hacker” from those typical Hollywood sci-fi 80s, and 90s movies, then this is the closest experience to it. According to McNeill, he best describes the gameplay, “as a strategy game, but with elements of roguelikes, puzzle games, action games, and more.”

The game is designed to be played with the Oculus Rift and plans to be released once the consumer version of the Oculus Rift is finally ready to ship. It has not yet been announced when the long-anticipated consumer version of the Oculus Rift will be released, but there has been some speculation that it could come before the end of the year. Until then, Darknet is still a lot of development work that needs to be done to tweak and finalize the game. And that development time will just help make the game get better for everyone. McNeill intends to keep his development process open to fans to follow and make suggestions through his subreddit community and plans to release some limited playable demos of the game in the near future for anyone interested.

Darknet will be showing off its first demo at the Game Developers Conference (GDC) on 17th – 21st March 2014.

Keep Talking and Nobody Explodes: Defuse a Bomb with the Oculus Rift