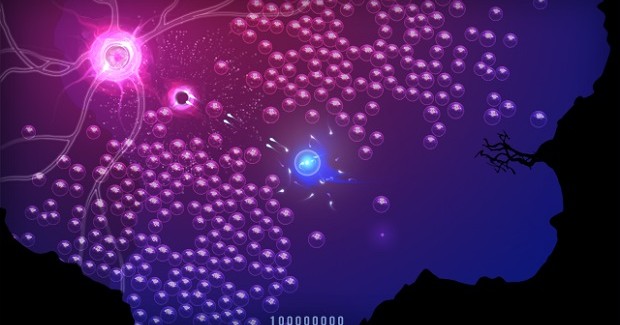 Similar to the gameplay style of Geometry Wars, players will shoot and manurer their way through a chaotic swarm of incoming enemies, while visually enjoying the beautiful array of graphical effects and colors that fill the screen. With the addition of Oculus Rift support available for the PC version, Project Life, will also give players the option to switch from the classic top-down view and allow for a completely new, immersive experience from a first-person perspective.

The overall concept of Project Life puts you in control of a healthy cell, as it attempts to rid of the purple deadly toxins that are infecting the area. As you eliminate the poisonous cells, they begin to turn into healthy rejuvenated cells, which open up more of the playing area to move around and further advance through the game. The game controls use a twin-stick shooter mechanic, while various attacks can be achieved through the face buttons. And though the game is fun and addictive to play with its normal top-down view, the feeling you get with the use of the Oculus Rift really adds to the immersive experience.

Project Life has actually been in development since 2012, and no exact release date has been announced yet—but with the anticipation of the consumer version of the Oculus Rift approaching, hopefully, we will get new updates soon.