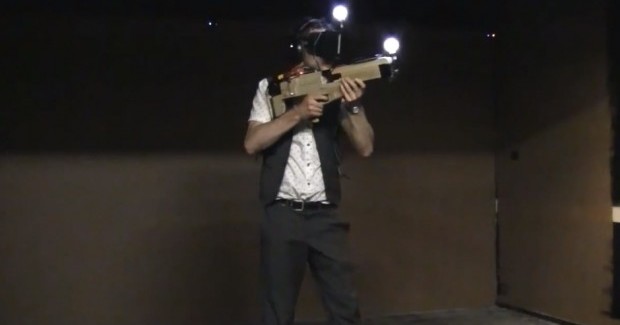 If you’re lucky enough to have already had the opportunity to try the Oculus Rift VR headset, you know just how cool it can already be, just sitting down and holding controllers. But we all know where it’s really headed—immersive 3D environments that you can walk around wearing, playing the game as if it were real.

The next level of VR is essentially the holodeck experience. It’s called the Inversion VR system from a company called Zero Latency. It’s not quite as cool as a real holodeck, since you don’t exactly just walk in and find yourself elsewhere; we’re not quite there yet. But the feeling you get is close enough.

To get started you put on your Oculus Rift headset, strap on a computer backpack, and wield a fake gun. But in order to make all this magic come to life, you first have to set up the entire room with a series of tracking cameras. It’s a lot of work. But the payoff far outpaces any work that goes in, because it is completely immersive. It works.

Motion-tracking technology takes the already next-generation technology in the Oculus Rift and takes it into a next-next-generation territory unheard of in previous gaming rigs. Sitting down and being immersed is enough—being able to walk around and use your gun like it’s real completes the immersive effect.

Unfortunately, this next-next-generation gaming technology is still just that: a few generations away. Zero Latency may be showcasing their rig and flagship game Zombie Fort: Smackdown at PauseFest in Melbourne Australia, but that doesn’t mean the home version is coming out anytime soon. For now, it seems the system is currently for demonstration purposes—and for an undisclosed price, you can book the gaming setup for an event.

The future of VR is coming, and it’s coming fast. New technology abounds, and developers are having a field day designing games for it. And with the new prototype of the Oculus Rift revealed with higher resolution and improved motion, you can just imagine what it will be like when all the latest technologies come together—an even better, more mind-blowing, and unreal experience.

Virtual reality is becoming every day more and more a real reality. Not The Matrix kind, though. This is the fun, game-friendly kind that gives gamers what they have always been looking for, even back in the days when slick graphics on a 2D screen were a thing of the future: a game that looks and feels as real as the world around you, but without the possibility, of course, of actually dying.

Oculus Rift is making that a reality, and as controllers catch up and designers get ever more creative with how they design these interactive environments, the future can’t get here quick enough.

Keep Talking and Nobody Explodes: Defuse a Bomb with the Oculus Rift