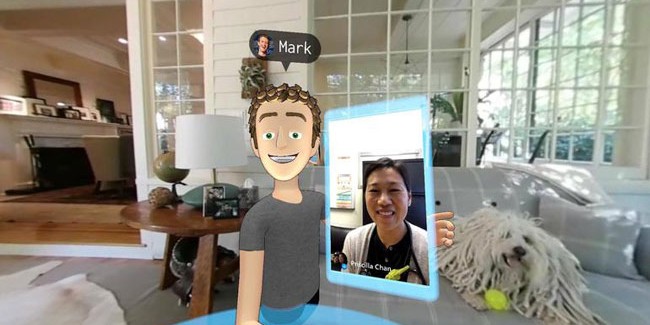 Today on stage at Oculus’ Connect 3 developer conference, Facebook CEO Mark Zuckerberg revealed an exciting, new social application for the Oculus Rift that allows you to interact with other people live in real-time in the virtual world.

Using his own cartoon-like avatar, Zuckerberg demonstrated avatars capable of facial expressions and emotions in real-time based on the user’s voice, as well as through inputting button or gestural commands with the Oculus Touch controllers.

“We should build software and experiences that follow the way our minds work and process the world,” Zuckerberg said. “Virtual reality is the perfect platform to put people first because of presence.”

The demo showed off several impressive features, including being able to change the environment to any 360-degree photo or video and explore them with your friends who appear as their own virtual avatars in the scene.

While sharing in this social VR experience with your friends you can play games like chess or cards, watch videos together, and even draw objects, pick them up and play with your own creations—like a virtual sword or light saber.

Users can also receive live video calls from people outside VR through Facebook Messenger, or take a virtual selfie using a VR selfie stick and share it on their Facebook timeline.

Zuckerberg didn’t announce an official release date for its new Facebook-enabled social VR application for the Oculus platform, but the app is likely to launch later this year with the release of the upcoming Touch controllers.