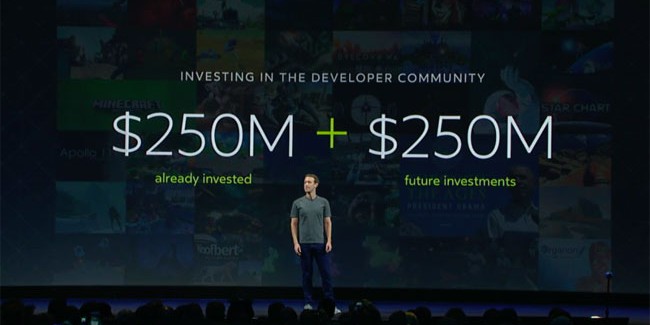 Today, during the first keynote of Oculus Connect 3, Facebook CEO Mark Zuckerberg announced on stage the company’s ongoing commitment to invest in the development of high-quality VR content for the Oculus platform by developers in the community.

Over the past few years, Facebook has already invested $250 million in funding VR games and applications, and it plans to invest another $250 million in order to continue to help developers fund virtual reality projects and accelerate development.

“We’re committing another $250 million to fund even more content development to developers in this community,” said Zuckerberg. “We’re really excited to do this.”

In addition, Facebook plans to also start a $10 million education fund that is focused on the development of education-based applications in virtual reality. The use of virtual reality as a learning tool could have a significant and positive impact on the way students learn and absorb information that can go beyond just textbooks.

“Education is going to be a powerful example of the potential of VR,” said Zuckerberg. “Already today, 10 percent of the experiences in the Oculus Store are education.”

The funding doesn’t just stop there. Oculus VP of Product, Nate Mitchell then also announced that the company will cover the royalty fees for any app using Unreal Engine that sells on the Oculus Store—up to the first $5 million in gross revenue a developer earns. As well as, a commitment to invest $10 million in programs like Launch Pad, VR for Good, and Amplified New Voices, including new programs like the Diverse Filmmakers Project to ensure diversity-based content makes its way into virtual reality.