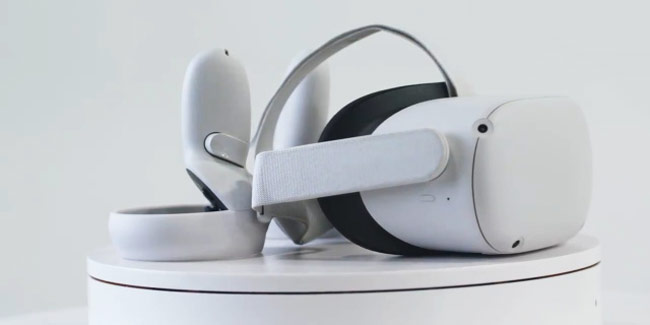 According to the leaked videos discovered on the Facebook Blueprint developer website, Quest 2 will feature several improvements and upgrades compared to the original standalone headset, including a new display that offers nearly 2K resolution per eye, and 50% more pixel density. It is also significantly more powerful, with a Qualcomm Snapdragon XR2 chipset instead of a Snapdragon 835, and comes with 6GB of RAM, up from 4GB, and doubles the storage to 256 GB, up from 128 GB. Facebook has not revealed what the refresh rate will be, though it’s rumored it could be 90Hz rather than 72Hz of the original Quest.

Some of the leaks may have already been taken down, but not before others were able to upload the videos to YouTube. You can check out one of the leaked videos entitled ‘Inside the Upgrade’ below:

While there are no specific details on the size or weight of the Quest 2, the video suggests that the new hardware will be smaller and lighter than its predecessor, and the new controllers that come with the headset are upgraded with improved ergonomics to offer users a more comfortable experience overall. Also, Quest 2 will support controller-free hand-tracking and offers 3D positional audio to add an extra layer of immersion while in the virtual world.

In addition to being an all-in-one standalone VR headset, the Oculus Quest 2 will also continue to support Oculus Link, allowing users to connect their headset to a PC via a USB-C cable and use it to play PC-based VR games.

Andrew Bosworth, Facebook’s vice president of AR/VR, confirmed the leak on Monday morning and said more details for the Oculus Quest 2 will come on Wednesday at 10 a.m PT / 1 p.m. EST.

Welp. It is hard to keep the lid on something this good and clearly the enthusiasm is bubbling over at Facebook. But stay tuned for more details (yes there are many more!) on Wednesday, 10am PT. https://t.co/YZ9ifnkolr

No price or release date has been officially announced or confirmed at this time, but we can expect a full reveal and further details regarding Oculus Quest 2 during this week’s Facebook Connect developer conference.