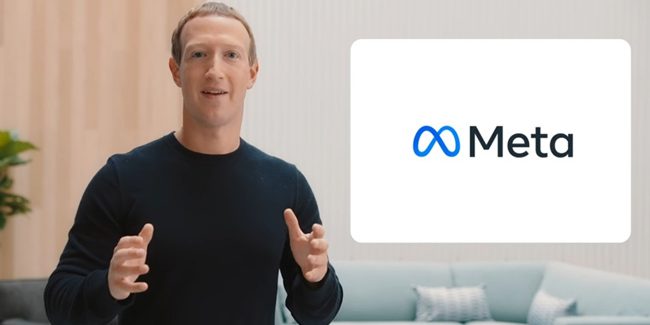 Facebook CEO Mark Zuckerberg announced today during his company’s annual Connect conference that it’s changing its name to Meta. The rebrand is a significant shift for the company as it now focuses its attention and resources on building the metaverse.

According to Zuckerberg, the company is positioning its name and identity to reflect more on its future ambitions and evolve primarily from a social network to a metaverse company, where augmented and virtual reality is at the center of its vision. “We have a new north star: to bring the metaverse to life,” Zuckerberg said. “From now on, we’re going to be metaverse first, not Facebook first.”

In a new Founder’s Letter for Meta, Zuckerberg also describes the metaverse as “an embodied internet where you’re in the experience, not just looking at it.” He goes on to detail the defining quality of the metaverse as being a feeling of presence. He explains that, in this future, people will be able to teleport instantly as a hologram to be with friends, family, or co-workers and do almost anything imaginable as if you are right there with another person or another place by sharing an immersive experience. “Feeling truly present with another person is the ultimate dream of social technology. That is why we are focused on building this,” Zuckerberg added.


Earlier this week, the company told investors that its corporate structure will remain intact, but the way it reports earnings will change. Beginning Q4 2021, Meta will report its financial results in two operating segments: Family of Apps and Reality Labs. Additionally, the company’s stock ticker will also change from FB to MVRS on December 1st.