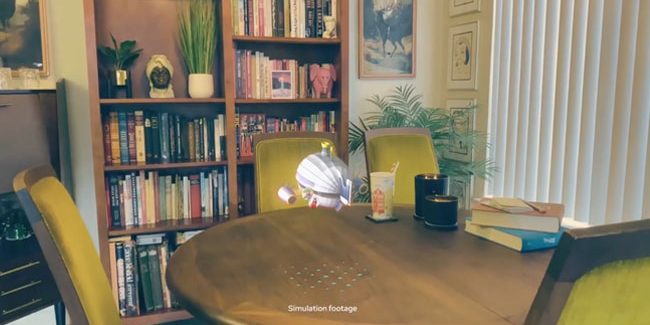 At this year’s Facebook Connect 2021 developer conference, CEO Mark Zuckerberg offered not only a glimpse of the upcoming Project Cambria headset, but he also revealed the codename of the company’s first fully-fledged pair of consumer augmented reality (AR) glasses, known as ‘Project Nazare’.

A short simulated video showcased a concept of AR experiences that users could expect using Project Nazare, such as communicating with friends over WhatsApp in holographic windows and setting up a game night, where friends appear as avatars in the user’s physical world to play a game. It’s still early development and just a work in progress.

Speaking about Project Nazare, Zuckerberg says that there’s still a long way to go to create AR hardware that can fit all the necessary advanced technology at the desired form factor. Ideally, the goal is to develop a pair of AR glasses about 5mm thick, or just approximately 3/16 inches.

“There’s a lot of technical work to get this form-factor and experience right. We have to fit hologram displays, projectors, batteries, radios, custom silicon chips, cameras, speakers, sensors to map the world around you, & more into glasses that are about 5mm thick. So we still have a ways to go with Nazare, but we’re making good progress.”

Last month, in partnership with EssilorLuxottica, Facebook released a pair of smart glasses named Ray-Ban Stories. However, these are not designed for augmented reality, as it features just a built-in camera, open-ear speakers, and microphone to capture point-of-view photos and video. It is, though, the “first step along the path to an embodied internet,” according to Zuckerberg. And one that the company believes will lead to the ultimate goal of achieving true augmented reality in a pair of consumer-friendly glasses that is comfortable and stylish enough to be worn all day.