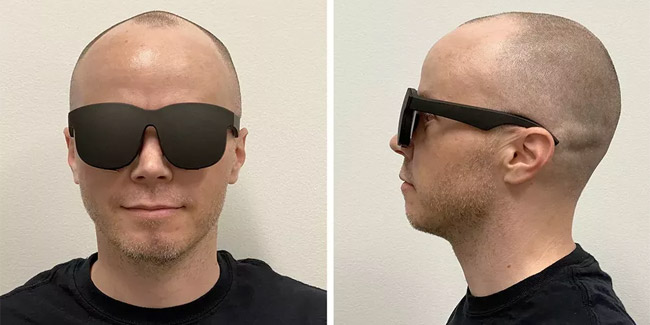 Facebook Reality Labs (FRL), the company’s AR/VR R&D division, has published new research on a holographic optics architecture that could enable the development of thinner, and lighter virtual reality headsets not much bigger than a pair of sunglasses.

Facebook discussed its research in a Siggraph 2020 paper entitled, “Holographic Optics for Thin and Lightweight Virtual Reality,” detailing how it has been working on a proof-of-concept headset that utilizes the power of holographic optics and polarization-based optical folding. This combined technique approach, also known as “pancake optics,” helps to reduce the amount of distance between the actual display and the lens that focuses the image, resulting in a far more compact and lightweight headset.

This type of new optical architecture design combines several thin layers of flat, holographic film to achieve a display thickness that is less than 9mm, while also capable of supporting a field of view that is comparable to today’s consumer VR headsets. Facebook’s proof-of-concept research device uses a laser illumination system and directional backlights to display either a flat (2D) or volumetric (3D) hologram imagery, which can also deliver a much wider gamut of the color spectrum to VR displays for better visual performance. And according to the FRL research team, progress in their optical display technology is made “toward scaling resolution to the limit of human vision.”

While there is no timeline on when or if this proof-of-concept will become an actual consumer product, Facebook is clear to point out that this is “purely research,” but holds a lot of promise at what such a compact, lightweight, and powerful VR device might look like in the future. If you want to take a more in-depth deep dive into the research from Andrew Maimone and Junren Wang on the Facebook Reality Labs team, you can read the full whitepaper here.