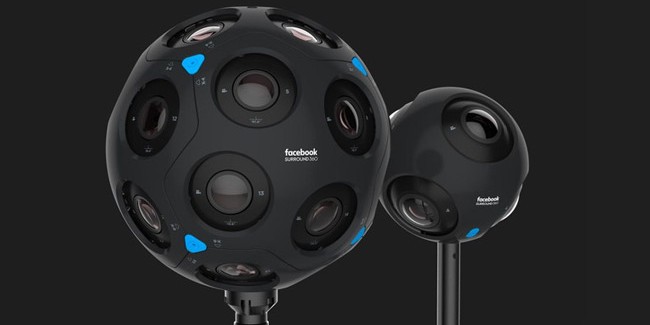 On Wednesday, during the annual F8 developer conference, Facebook announced the second generation of its Surround 360 video camera design—the x24 and x6 camera models as an upgrade to the one the company debuted last year.

The x24 is the bigger model named after the simple fact that it has a 24-camera array arranged within a sphere-shaped body, whereas the x6 which is intended to be more portable has only six cameras. The x24 was built in partnership with FLIR, a company known for its thermal-imaging cameras while the x6 prototype was created entirely in-house. Facebook intends to license out the designs to select commercial partners in an effort to push the adoption of its technology to content creators.

As for the upgrades, both Surround 360 cameras are not just refined versions of last year’s hardware. The new x24 and x6 also now capture 8K-quality footage with six-degrees-of-freedom (6DoF) for more immersive 360 content. This is significant because it allows a viewer in VR to move through the scene and experience it from different angles, instead of looking at a relatively flat environment. This means not only are viewers able to move up, down, left, and right like before, but also forward, backward with pitch, yaw, and roll and see the content adjust accordingly.

Another exciting thing about filming a scene in 6DoF is that you can utilize visual software and editing tools to add CGI effects. Since depth data is captured by the cameras’ sensors at every pixel, CGI effects can be combined with the live-action 360-degree footage which opens up a world of creative possibilities for filmmakers.

Facebook is also partnering with a number of post-production and visual effects companies, including Adobe, OTOY, Foundry, Mettle, DXO, Here Be Dragons, Framestore, Magnopus, and The Mill to help develop the necessary tools and workflows for the new camera system.

Both the x24 Surround 360 and the x6 Surround 360 are expected to go into production later this year, although no specific release date has been announced yet.