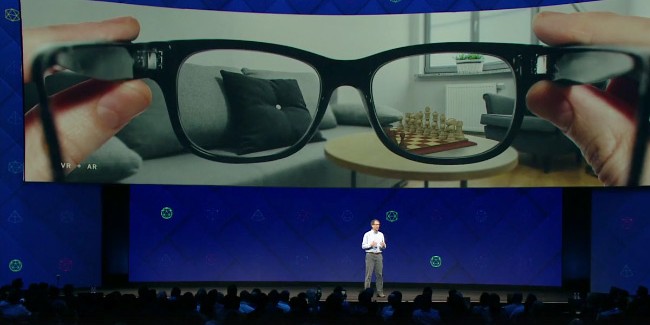 Oculus chief scientist Michael Abrash took to the stage at this week’s annual Facebook F8 developer conference to share an ambitious and long-term vision of how the future of virtual computing, specifically augmented reality, has the potential to enhance almost every aspect of our lives.

Abrash believes AR glasses will be one of the great transformational technologies of the next 50 years. In his F8 keynote, Abrash predicts a world where conventional smartphones no longer serve an ideal purpose and instead are replaced by stylish, lightweight, and powerful AR-enabled glasses that we would wear practically at all times.

“Twenty or thirty years from now, I predict that instead of carrying stylish smartphones everywhere, we’ll be wearing stylish glasses,” said Abrash during his keynote. “Those glasses will offer virtual reality, AR, and everything in-between, and we will wear them all day and use them in almost all aspects of our lives. The distinction between AR and VR will vanish. The real and virtual world will mix and match throughout the day, according to our needs.”

In the near future, VR and AR will continue to take separate hardware paths due to certain technological constraints. And although VR will undoubtedly be the most immersive way people experience and interact with the virtual world, Abrash points out that that “always-on, go-everywhere mixed reality” will not be its strong suit due to a VR headsets’ lack of social acceptability.

“Few people are absolutely comfortable socializing in-person with someone whose eyes they can’t see,” Abrash explained. “…and social acceptability is an absolute requirement for wearing it in public.”

As a result, the ideal approach toward integrating virtual computing into our everyday lives will be through utilizing see-through AR glasses. With the use of see-through AR glasses, Abrash says that this would lead to achieving what he described as ‘Full AR,’ which is augmentation that enhances your vision and hearing seamlessly in order to make you smarter and more capable, while also being “light, comfortable, stylish, power-efficient, and socially acceptable enough to accompany you everywhere you go.”

“Full AR will not be an occasional or special case device,” Abrash says. “It will be your always-on helper continually aware of your surroundings, your context, and your history. Constantly mixing the real and virtual worlds to serve your needs and keep you connected.”

While the Oculus Research team is hard at work on AR, Abrash notes that much of the technology necessary to enable ‘full AR’ does not currently exist. Development in optics and displays, audio, interaction, computer vision, AI, system design, UX, and graphics all need major advancements before ‘full AR’ becomes reality and an integral part of our lives.

“Despite all the attention focused on AR today, it will be 5 years at best before we’re really at the start of the ramp to widespread glasses-based augmented reality, before AR has its ‘Macintosh moment’,” he said.

However, according to Abrash even once we’re on that ramp it may still take several more years to fully realize augmented reality’s potential, similar to how it took decades for human-oriented computing to mature and reach billions of people.