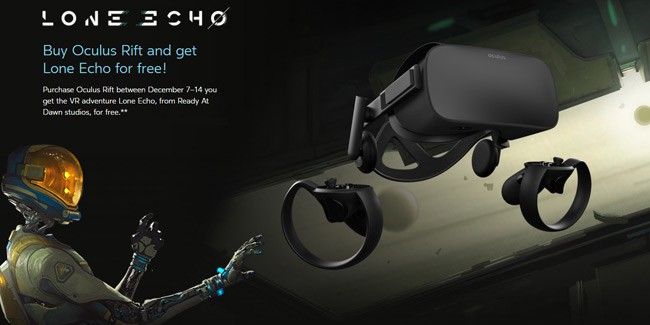 Oculus has announced that now for a limited time only, holiday shoppers that purchase an Oculus Rift bundle will also get a free copy of Ready at Dawn’s zero-gravity VR adventure, Lone Echo.

The recent announcement coincided with this year’s fourth annual Game Awards show, according to an official Oculus blog post, at which Lone Echo received a nomination for VR Game of the Year.

In addition to getting a free copy of Lone Echo when you purchase an Oculus Rift, the bundle includes the Oculus Rift headset, two touch controllers, two USB sensors, and seven other free games and titles to experience including Lucky’s Tale, Medium, Toybox, Quill, Dead and Buried, Dragon Front and Robo Recall.

This limited-time offer is available now only through 11:59 PM PT on December 14th, 2017. Be sure to also pick up Lone Echo’s critically-acclaimed competitive multiplayer spin-off, Echo Arena, which is already free to download on the Oculus Store as part of a co-sponsorship deal between Ready at Dawn and Oculus.