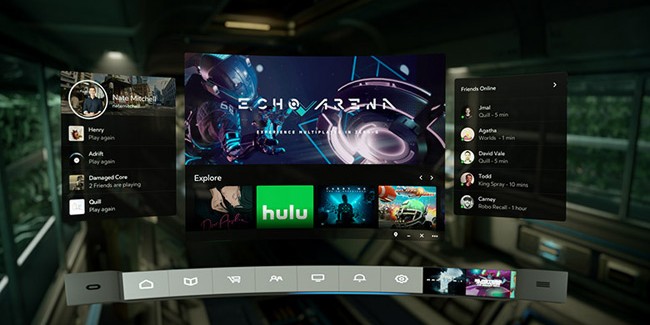 Oculus’ biggest Rift software update to date finally arrives as a beta starting today. The ‘Rift Core 2.0’ beta update is a complete overhaul of the Rift’s core experience and is available now by opting into the Public Test Channel via the Oculus desktop app.

Rift Core 2.0 is designed from the ground up and consists of three major components that are built natively for Oculus’ intuitive Touch motion controllers. The first is a redesigned Oculus Home that is fully customizable, allowing you to decorate your virtual space as you see fit, and features a variety of interactive objects and decorative collectibles. The second is Oculus Dash, a brand-new system interface that makes it simple to switch between different apps at any time while wearing your Rift headset and lets you access your Windows desktop and traditional apps within VR. The other big addition is the updated Oculus desktop app that is focused mainly on discovery to make it easier than ever to find new games and experiences across the entire Oculus platform, as well as to connect with friends in virtual reality.

“This is just the beginning of a new chapter for Rift,” Oculus’ Head of Rift, Nate Mitchell, wrote in an official company blog post. “Core 2.0 lays the technical foundation for our long-term roadmap, and we have ambitious plans for the years ahead. While we’re excited about everything that’s launching today, we’re most excited for what comes next.”

While the Rift Core 2.0 beta is still in the early stages of development, the Oculus team is encouraging the Rift community to provide feedback and suggestions on features they would like to see in future software versions. Users can report bugs and suggest ideas to improve the Rift Core 2.0 experience using the new UserVoice feedback tools.

To learn more about using Rift Core 2.0, be sure to check out the Oculus Team’s getting started guide today!