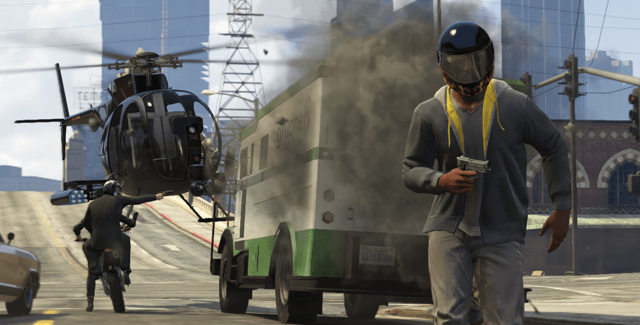 If you haven’t been living under a rock for the past decade or so, you’ve probably played at least one of the Grand Theft Auto games, or Red Dead Redemption. Those games come from parent publisher Take-Two Interactive, and Take-Two CEO Strauss Zelnick has made some pretty positive comments about the future of those series and the Oculus Rift. So you could be looking at future editions of those games that feature VR functionality with headsets like Oculus Rift.

Zelnick talked with GamesIndustry International, where he said, “Oculus Rift was a big smash and wonder at CES–and our folks were very impressed with it.”

Zelnick said he hasn’t played with the Oculus Rift himself; he’s not much of a gamer, in fact, to hear him tell it. But he said that Oculus Rift has fixed many of the problems that have long existed when it comes to creating a virtual reality environment; for many years, VR developers struggled with creating immersive headsets that didn’t lead to motion sickness among users. But Oculus Rift seems to have addressed many of those concerns, and the Rift seems like a viable headset for use in future games from his company.

But Take-Two is far from alone when it comes to looking at budding virtual reality technologies for integration into their game environments and systems. During a DICE presentation yesterday, PlayStation 4 architect Mark Cerny intimated big things for virtual reality in the second half of this decade, and into the 2020s; virtual reality systems “could be pretty significant going forward in that time frame.”

Sony is said to have its own virtual reality headset in development, intended for use with the PlayStation 4. This is in addition to its current array of mounted displays, and that lends additional credence to Mark Cerny’s comments at the DICE presentation in Las Vegas yesterday.

Oculus Rift has yet to be released for a commercial audience—for now, it’s just for developers and game conventions. And the company has yet to release any details on when it will be. The creator of Oculus VR, the company that manufactures Oculus Rift, has big plans for the technology, though. At that same DICE conference in Las Vegas, Palmer Luckey, the creator of Oculus VR, announced that VR technology may be “one of the most important technologies in the history of mankind.” Call it bravado, but he may be on to something: developers, designers, and investors everywhere are beginning to turn their heads and look at what Oculus VR is doing—and getting ready for the big splash it looks like it may make when it hits the commercial market.

EVE: Valkyrie Showcases Just How Close ‘True’ VR May Be