iFixit Scores the Oculus Rift 7 out 10 for Repairability 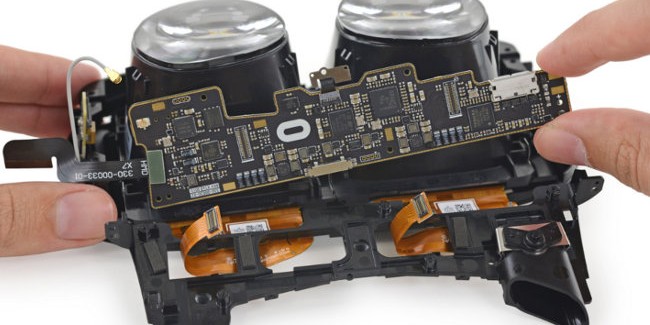 Now that the first consumer version of Oculus Rift (CV1) was released this week, the team at iFixit got their hands on taking one apart for a closer look at the internal components and seeing how this game-changing hardware was put together.

As expected, the teardown revealed a number of changes over earlier development kits of the headset, with Oculus making several improvements in key areas. The Oculus Rift CV1 features dual integrated lens-mounted displays, unlike the interchangeable lenses found on previous dev kits. There’s improved inter-pupillary distance (IPD) adjustment, and the asymmetric, hybrid Fresnel lens allows for adjusting the focus much better to fit your needs.

According to the iFixit, the Oculus Rift CV1 feels like the “sleekest Rift yet,” it’s lightweight and very comfortable. iFixit praised the cable management for being much improved over previous dev kit versions, including the simple to remove earpiece speakers thanks to spring connectors, and the face pad held in with plastic clips can be pulled off the headset for easy replacement.

On the downside, some areas where DIY repairs might prove too difficult are the removal of the lenses, display, and motherboard due to an “intricate design and delicate ribbon cables.” The head strap is also said to be “impossible” to replace without slicing through the fabric.

Overall, the Oculus Rift CV1 earned a solid 7 out of 10 repairability score, which is quite good compared to what other modern electronics typically receive.