Oculus and Harmonix Announce 'Rock Band VR' for the Rift 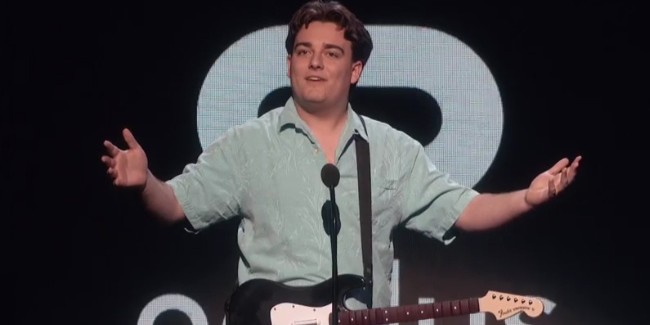 Image courtesy of: The Game Awards

Oculus founder Palmer Luckey made his ‘surprise announcement‘ Thursday night at The Game Awards 2015 in Los Angeles, with the reveal of a partnership with Harmonix to bring a virtual reality version of Rock Band to the Oculus Rift.

With Rock Band VR, the team at Harmonix and Oculus are aiming to deliver a completely new, and immersive experience to the music game genre by making you feel more like a rock star than ever before with the Oculus Rift virtual reality headset.

“We’ve been working on Rock Band VR with Harmonix for a really long time, and I’ve played a lot of hours of it,” said Luckey. “Looking over, seeing your drummer on the left, seeing a guitarist on your right, wailing out on a guitar solo, and just looking out at the crowd and just feeling like you really are a rock star, it’s an incredible experience.”

A brief glimpse of gameplay footage was also shown in the promo trailer debuting Rock Band VR, featuring Luckey alongside the developers from Harmonix, and the band DragonForce—you can watch it below.

Luckey did not announce the consumer release date for the Oculus Rift, however, he did reiterate that the Rift will be coming in Q1 of 2016, along with Rock Band VR next year. Stay tuned for more updates, as we learn more details.

Palmer Luckey to Make a ‘Special Announcement’ at The Game Awards on Dec. 3rd