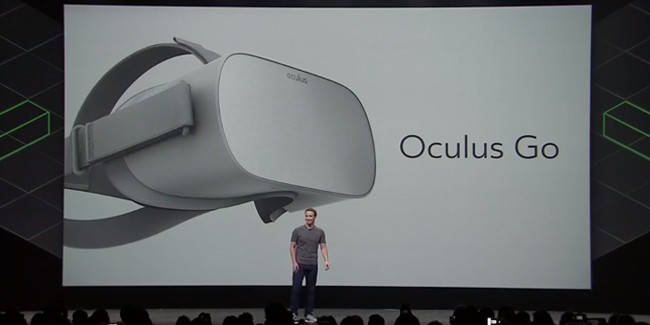 Today, Facebook CEO Mark Zuckerberg announced on stage during the Oculus Connect 4 keynote a new standalone VR headset called Oculus Go that will ship to the masses early next year and cost $199.

Oculus is strategically positioning its Go headset as the most accessible and easiest way to experience virtual reality, as part of the company’s effort to reach a milestone goal of getting 1 billion people in VR. According to Zuckerberg, Oculus Go is an “all-in-one” headset that will enable users to experience VR without plugging into a computer or relying on a smartphone. With Oculus Go you simply put on the headset and just immersive yourself.

The Oculus Go headset is considered the “sweet spot” between PC and mobile virtual reality experiences. Oculus head of VR Hugo Barra described it as “super lightweight” and “a leap in both comfort and visual clarity.”

At a price point of only $199, the Oculus Go headset has some pretty impressive features including an all-new 2560×1440 “fast-switch” LCD display, which is designed to reduce the screen door effect and improve the visual clarity compared to OLED displays. In addition, the headset is said to also use custom “next-generation” lenses that offer the same wide field-of-view as the Oculus Rift, but with significantly less glare and includes integrated spatial audio, which can be used without headphones.

“Audio drivers are built right into the headset,” Barra said, which “makes getting in and out of VR much faster and easier to share with another person.”

The Oculus Go headset is said to be “binary compatible” with the Gear VR, which means that every app in the Gear VR ecosystem will also work with Oculus Go. This is particularly useful for developers that are already building for the Gear VR because now they are essentially supporting both platforms and are able to easily expand their reach to a wider audience. Developers can expect to get their hands on an Oculus Go development kit in November.