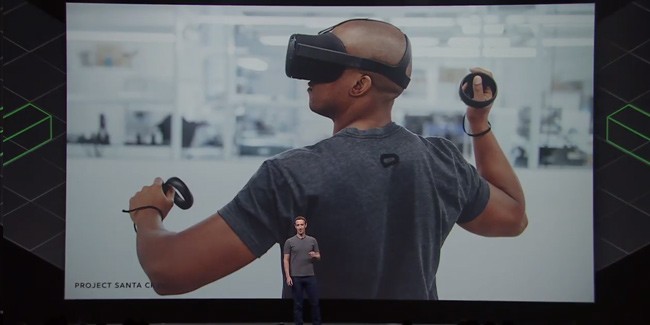 During the opening keynote at Oculus Connect 4, Facebook CEO Mark Zuckerberg revealed that Oculus’ high-end standalone VR headset prototype, codenamed ‘Santa Cruz’, will finally be in the hands of developers by next year and confirmed that it will feature six-degrees of freedom (6DoF) controllers.

The Santa Cruz prototype was first shown at last year’s Connect, however, since that time the headset has gone through quite some notable changes. Oculus’ latest version now appears much more refined and looks closer to a finished product rather than a headset which is still a work in progress. The head-mounted display utilizes four ultra-wide front-facing sensors, allowing for both “inside-out” positional tracking and the ability to accurately track the controllers across six-degrees of motion. This is one of the distinct differences that set it apart from the Oculus Go, which is the company’s newly-announced $199 standalone VR headset that will ship to consumers in early 2018.

According to Oculus, Santa Cruz is the very first high-end VR headset to offer full inside-out tracking. With full inside-out positional tracking, this means that it does not require any external sensors, nor need to be tethered to a PC.

“Ever since building Rift, our dream has been to bring the magic of a PC VR experience to an untethered form factor,” Oculus wrote in a blog post. “That’s why we were so excited to share our early work with Santa Cruz at Oculus Connect last year. Although that first prototype had a full-blown mobile computer strapped to the back of your head, the feeling of freedom you got when first experiencing fully untethered positionally-tracked VR remains unparalleled.”

The new controllers for Santa Cruz are very similar to Oculus’ Touch controllers for the Rift, however, they offer a more compact design and feature a touchpad instead of the analog stick. They also take advantage of the same constellation tracking technology developed for Rift and Touch in order for the new controllers to be able to track 6DoF motion and enable hand presences in a true standalone form factor.

“Getting the infrared LEDs on our new Santa Cruz controllers to work with the sensors used for inside-out tracking on the headset was a significant computer vision, design, and engineering problem,” Oculus explained. “This is a milestone we’re proud of. By using four ultra-wide sensors, we achieved a large controller tracking volume, allowing for natural and unrestricted movement.”

While there are still some specific details about Santa Cruz that remain to be seen, Oculus promises that they will be sharing more updates with us in the coming weeks and months ahead. Stay tuned!

Oculus Rift and Touch Bundle Gets Permanent Price Cut to $399