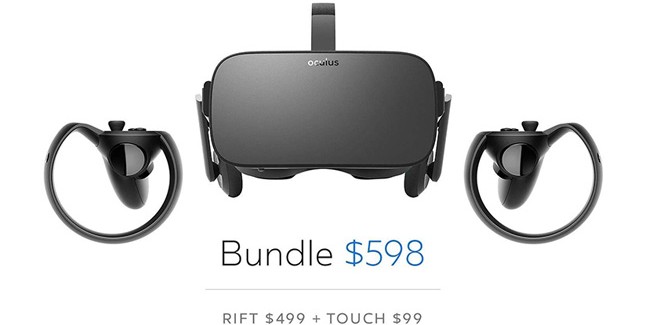 During the 2017 Game Developers Conference (GDC), Oculus announced a significant price cut for both the Oculus Rift headset and Touch motion controllers in an effort to make high-end VR more affordable and help push it into the mainstream.

Starting today, the Oculus Rift bundled with a pair of Touch motion controllers will cost only $598, which is about $200 cheaper than when it was released last year. The Oculus Rift and Touch can also be purchased by itself for $499 and $99, respectively. However, you may want to consider purchasing both if you’re looking to experience virtual reality in the most immersive way possible. In addition, the price of an extra Oculus Sensor from room-scale VR setups has also dropped from $79 to $59.

Jason Rubin, Oculus’ Head of Content, said in a blog post that the new lower price point is part of the company’s aggressive strategy to make high-end VR more accessible to a broader audience.

“We believe this lower entry price will attract consumers to PC VR at a faster pace,” said Rubin. “This is universally good for the entire community, but especially for developers. A larger user base means higher potential sales, easier player matching, better communities, and results in the ability to invest more in titles. This increased investment means better software which in turn brings more consumers.”

There is no doubt that this permanent price drop of the Oculus Rift headset, Touch and Sensor makes it much more enticing for anyone that may have been holding out on the side to purchase a high-end VR headset to finally get onboard. And, although VR still remains relatively expensive, this move by Oculus signifies a big step toward driving prices down across the industry and further expanding the VR market.