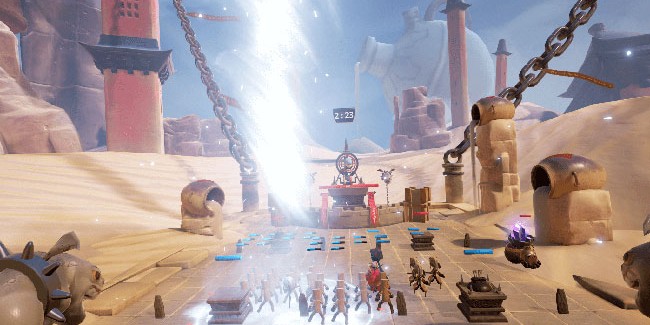 At this year’s Game Developers Conference (GDC), Oculus offered a glimpse at some of the exciting new titles coming to the Rift and Gear VR in 2017.

This brand-new lineup of VR games includes titles across various genres such as RTS, RPG, action, stealth, puzzle, and shooter, with four titles designed to support the Oculus Touch motion controllers and two “must haves” for the Gear VR. Let’s take a quick look at some of the promising virtual reality game experiences heading to the Oculus platform later this year.

The way of battle is simple: summon the units by grabbing them with your hands. Choose your units wisely, have a strategy of your own and fight until the end. Strong units are crucial to winning the battle. Strengthen your units by training and upgrading them in the lab.

Brass Tactics takes real-time-strategy to the next level by placing you in the middle of the action on a fantastic clockwork battlefield. Experience the thrill of directly moving and interacting with your clockwork creations: grab structures and place them on the battlefield, and direct your units with the sweep of your hand. Just when you think you’ve mastered the game, raise the stakes by teaming up with other players in co-op mode or go head to head in PvP mode.

From Other Suns, from Gunfire Games

Your own ship. A crew. Steady work. Things were going well until the Collapse. Now you and half of humanity are trapped on the far side of the wormhole with ruthless pirates, scheming corporations, and worse—new threats from outside known space.

There’s danger at every jump on this side of the wormhole. You and up to two of your friends will tour the sector, upgrading your ship, stockpiling weapons, and fighting for your lives. And when you all die, you’ll discover new challenges in your next playthrough.

Fight and try to save humanity, or just joyride through the galaxy until its extinction. Your call.

Welcome, apprentice. Don your Wizard’s robe and become a mighty conjuror. The corrupted wizard, Gaufroi, has kidnapped your master, Mage Alguin, and it’s up to you to save him. To win the day, you must conquer eleven devious dungeons, from the stinking sewers of Skara Brae to the living tombs of evil Charm. Mind bending puzzles, terrifying traps, and deadly monsters stand in your way, all perfectly capable of sending you to an early grave.

But worry not. With the power of Oculus Touch, you wield raw elemental power in the palm of your hand, allowing you to sling gouts of flame, javelins of ice, arcs of lightning, and swirling tempests which can finish off any fiend that stands in your way – from the snarkiest goblin to the burliest giant. And as you delve deeper into the depths, you find and master forgotten secrets, ancient lore, and powerful spell reagents with which you can craft increasingly exotic spells to defeat even greater foes. You may be an apprentice now, but to save your master, this must become your Mage’s Tale.

Augmented Empire is a story-driven tactical RPG set on the island of New Savannah, an isolated neo-noir city divided into three tiers by the ‘Citizen Grade System.’ While the citizens deemed of high societal value live in luxury at the summit, outliers and criminals are forced to live in squalor at the island’s depths.

From the armchair of their secluded hideout, the player uses simple look-and-click controls to instruct their team of 6 augmented misfits in a world rendered as an ‘augmented reality’ diorama before their eyes, while interacting with the office around them to investigate new developments, make calls, and develop the skills of their team.

Battle law-makers and law-breakers alike to mastermind the revolution.

Force Field VR combines third-person stealth and immersive first-person puzzle-solving in Term1nal. A skilled avatar pilot for hire, you’ll use advanced VR hardware to control androids from the safety of your apartment as you uncover a high-tech facility’s dark secrets.

The new lineup of upcoming VR content making its way to the Rift and Gear VR, promises to deliver the “depth and polish” we all have been waiting for. So far, it looks like 2017 is going to be quite an exciting year for VR gamers.