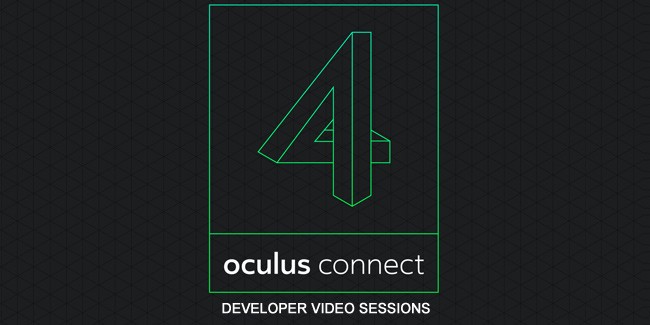 Today, we take a look back at Oculus’ fourth annual Connect developers conference (OC4), where more than 2,900 developers, content creators, and VR enthusiast from around world came together to collaborate and share their ideas in an effort to push the virtual reality industry forward.

This year’s OC4 schedule was filled in-depth technical talks and workshops from more than 100 speakers addressing a range of topics across Design, Development, Distribution, and the Future of VR. For those not lucky enough to attend Oculus’ big two-day conference event, the company recently released a series of developer session videos to watch online. If you’re looking to expand your VR knowledge, then you’ll want to check out the videos below.

‘Controlling your system inside VR presents unique challenges. We’ve learned a lot from building VR interfaces, seeing how people use them, and discovering what else they’d like to do. Hear directly from the Oculus PC VR team and learn how to apply these best practices to your own UI and UX challenges in VR.’

Shooters and Strategy Lessons Learned from Skyworld and Arizona Sunshine

‘Vertigo Games will talk about their experience of developing Skyworld and how many of the lessons learned from creating VR shooter, Arizona Sunshine, are transferable to other VR genres. Learn about their Unity tools, tricks and hacks that they used to make their titles available on various hardware ranges.’

The State of Standalone VR

‘The exciting new category of Standalone VR comes with both opportunities and challenges alike. Join Oculus product management and development to discuss the current state of the hardware, plus how the Oculus team’s work in research, prototyping, vision, and more have all contributed to making it a reality. Learn how to build your own experiences for the next wave of VR hardware.’

‘Get up to speed on key terminology and concepts you need to know, then dive directly into the newest audio tech developed by Oculus. We’ll cover how new techniques and tools like Near Field HRTF and Volumetric Sound Sources help create dramatically increased immersion for people experiencing your game or app. Attendees will also get a first look at what’s coming in the Audio SDK roadmap.’

‘Mixed reality capture is the best way to show people outside VR what it feels like to be immersed in VR. We’ll demo how to use the Rift SDK’s new mixed reality capture support, which includes a tracked camera, various composition methods, virtual green screen, dynamic relighting, and camera latency synchronization. Following set up, we’ll walk through the important technical considerations for adding it to your Unity, UE4, or native app. You’ll also hear directly from the Oculus Medium team, who will share their techniques for creating top-quality content.’

Too Close to Draw Call: Pushing Unity to Max Performance on Mobile VR

‘Mobile VR optimization is a tricky process. Making frame rate while operating within strict thermal limitations is a tall order, even for veteran developers. Working in Unity, this talk focuses on achieving maximum performance across a variety of mobile VR devices.’

‘Engineers from NVIDIA and Oculus are working together to create tools for making the best VR experiences possible. Everything from haptics, physics, graphics, and audio come into play when building a compelling VR experience. In this talk, we’ll discuss VRWorks Audio and Graphics features like LMS, SPS, MRS, and VR SLI, which can be used to improve performance and bring a new level of visual fidelity, performance, and responsiveness to your VR game or application.’

‘VR is the most immersive way to interact with people across massive distances, letting us spend time with friends, meet new people and participate in incredible experiences. When designing social experiences, care must be taken to ensure that those social experiences are safe and enjoyable. We’ll walk through some of the lessons learned and discuss features we’re building to keep people safe in social VR.’

‘Graphic performance optimizations are important for compelling VR experiences and will be even more important in the future due to expected growth of resolution, frame rate, and field of view. Join the AMD graphics research and architecture team as we explore the temporal rendering and reconstruction technique for optimizing lens matching and foveated rendering. Quality and performance trade-offs will be explored, along with the preliminary results of integrating this technique into the Unreal Engine.’

‘An industry vet with a career spanning Activision, PlayStation, and Kixeye, Oculus Producer Rade Stojsavljevic will provide an in-depth look at the state of mobile VR. He’ll be joined by speakers from Turtle Rock and Coatsink, each presenting their insights as independent studios defining today’s modern gaming experiences.’

From New Project to Social VR in 30 Minutes

‘Social interactions are some of the most compelling and exciting experiences in VR. Unfortunately, experimentation can be difficult due to overhead, networking, concurrency, and synchronous behavior. This session will show you how to leverage existing tools in the Oculus PC, Platform, and Avatar SDKs to get a social VR testbed up and running in Unity in under 30 minutes.’

‘Dive into best practices for 360° content creation. We’ll explore the quality threshold for VR headsets, image stitching and stereoscopic 360, and encoding for Facebook. In addition, we’ll be joined in a fireside chat with Paul Raphael and Ryan Horrigan of Felix & Paul Studios about the making of MIYUBI.’

Stay tuned to OVRnews for more coverage on the latest Oculus news and updates once they become available.