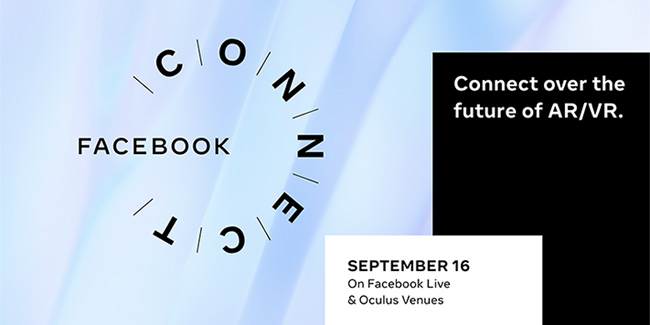 Oculus’ parent company Facebook is continuing its efforts to rebrand the Oculus name. The company has revealed that its annual Oculus Connect event will now be known as Facebook Connect. This year the event will be held virtually on September 16th.

“This is our seventh year hosting our annual AR/VR conference, and over the years, Connect has grown to include so much more than Oculus, with research updates and product news from Spark AR to Portal from Facebook,” the company said in an official blog post. “Moving forward our annual AR/VR event will be called Facebook Connect to better reflect its broader scope.”

Now in its seventh year, Facebook says that the renamed Facebook Connect will continue to focus on the company’s AR/VR efforts and promises to feature “keynotes from Facebook leaders and industry visionaries,” covering the latest innovations in AR and VR technology. There will also be “immersive developer sessions” for viewers to take part in and plenty of exciting announcements made throughout the annual developer conference event.

Further, Facebook has also officially renamed its internal AR/VR team to Facebook Reality Labs (FRL). Previously, FRL was the name given to the company’s research division, which was once known as Oculus Research. Now, the team will operate under the name of FRL Research and will continue to be led by Chief Scientist Michael Abrash.

“Before today, we lacked a unified brand identity from which to tell the story of how we’re building the future of VR and AR,” the company said in a statement. “With the Facebook Reality Labs name, we’re making clear where these technologies are coming from. We hope you’ll come along for the ride. In the meantime, we’ll be working in the lab.”

Just last week, Facebook sparked some backlash from the Oculus fan community after the company announced that it would eventually require a Facebook account for users to sign into their Oculus devices. Despite all the corporate changes that have recently taken place this week, Facebook has made it clear that the Oculus branding is not going away, and that the company plans to still use the Oculus name for its VR headsets and future products.

Facebook ‘Horizon’ Invite-Only Beta Will Start in the “Coming Weeks”