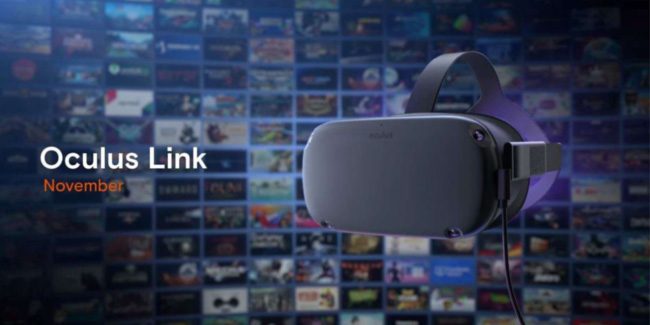 During the OC6 opening keynote on Wednesday, Facebook CEO Mark Zuckerberg announced that a software feature called Oculus Link is coming to its standalone Quest headset, which will allow Quest owners to connect their headsets to a VR-ready gaming PC via USB-C to access the entire library of Rift games and experiences starting in November.

With Oculus Link and a “high-quality USB 3 cable”, anyone with a Quest headset and a gaming PC will be able to run popular Rift titles that are more graphically-intensive and performance-demanding than what is currently possible on the Quest standalone headset powered by its Qualcomm Snapdragon 835 mobile chipset. Oculus says it plans to also release its own “premium optical fiber cable” to take full advantage of the Oculus Link software later this year.

“For developers, this means it’s now possible to build high-end PC games and experiences while taking advantage of the biggest possible market and connecting with new audiences as the Quest community grows. Oculus Link is truly the best of both worlds: the high-end gaming of Rift when connected to a PC, with the ease and portability of Quest on-the-go,” says Oculus.

Additionally, the company announced that it is bringing over popular Oculus Go titles to the Quest, starting with more than 50 Go apps available next week. Quest users that already own an app on Oculus Go will also be able to upgrade them to the Quest version for free from now until the end of the year.