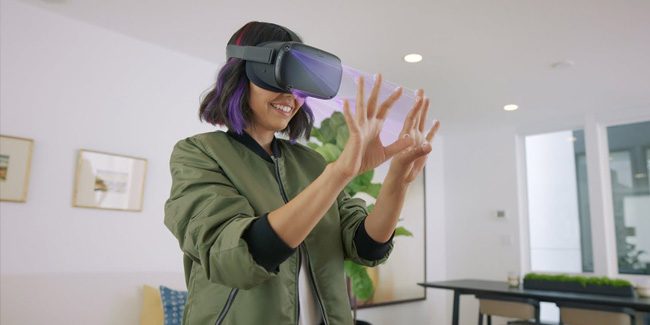 Facebook CEO Mark Zuckerberg has announced today at Oculus Connect 6 (OC6) that the Oculus Quest standalone headset will support full hand-tracking in a software update to the Quest’s built-in camera sensors early next year, as an alternative to using a controller-based system like Oculus Touch.

When hand-tracking arrives next year for the Oculus Quest it will initially launch as an experimental ‘opt-in’ feature for consumers and as part of an SDK for developers, which will allow devs to start integrating and building immersive Quest experiences that support hand-tracking for more natural forms of gameplay interaction in the virtual world.

“Our computer vision team developed a new method of using deep learning to understand the position of your fingers using just the monochrome cameras on Quest today—no active depth-sensing cameras, additional sensors, or extra processors required. This technology approximates the shape of your hand and creates a set of 3D points to accurately represent your hand and finger movement in VR,” Oculus explains in a blog post.

For in-depth detail into how the Facebook Reality Labs and Oculus leverage the power of artificial intelligence and deep learning to make hand-tracking possible on Quest, check out Facebook’s developer blog post to learn more.