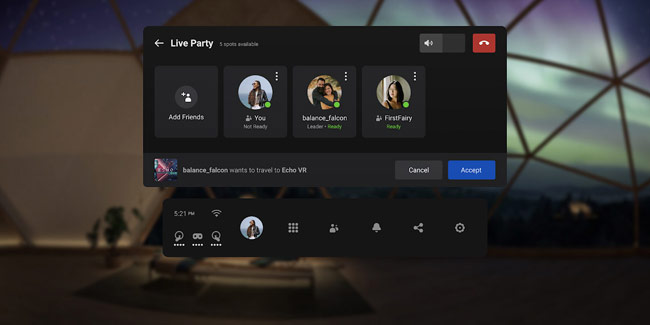 Oculus has introduced a couple of new social features that are now rolling out across its platform to help you connect with friends in VR and make it easier to jump into the same game together for a much more social and enhanced user experience.

The new ‘Public Parties’ feature can now host a voice call of up to 8 people at a time, and while you can invite existing friends to join, you will also be able to discover new friends by making your party public for anyone to join in on the fun and hang out together in VR over voice chat.

Oculus’ other new feature called ‘Travel Together’ will also allow you and your group within a party to jump into supported apps and experiences with each other on the platform. With Travel Together, a party can enter social experiences directly without having to go through multiple menus or waiting for friends to join. Currently, a handful of apps support this feature, including Echo VR, Racket: Nx, Synth Riders, Eleven Table Tennis, Elven Assassin, Epic Roller Coasters, Arizona Sunshine, Cloudlands 2, Spaceteam VR, Ironlights, Multiverse, and Pro Putt by Topgolf.

Additionally, Oculus has also made it easier to find friends on Facebook that have an Oculus headset. Users can now set their privacy settings to control whether or not people can find them by their Facebook name and choosing between Only Me, Facebook Friends on Oculus, and Public. When setting up a new Oculus account, this setting will default to “Facebook Friends on Oculus,” but it can be changed at any time to fit your preferred privacy preference.