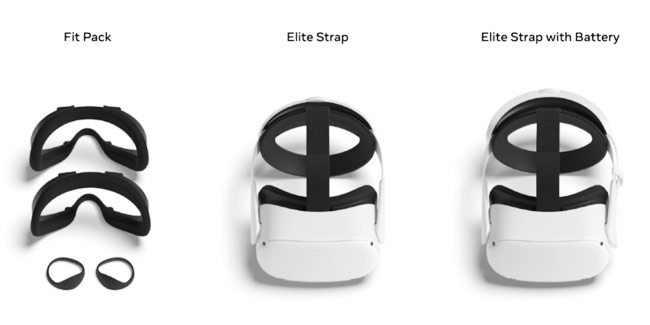 Oculus’ parent company Facebook officially announced that the Quest 2 standalone VR headset is coming this October, and alongside the headset reveal, the company also announced a full line up of first and third-party accessories designed to improve the overall comfort and experience of the Quest 2.

While the Oculus Quest 2 might be lighter than its predecessor, there’s still enough weight on the front of the device that you may notice weighing down on your face after a long session in VR. Out of the box, the Quest 2 ships with a soft fabric head strap, which should be sufficient for most casual users, but if you’re looking to get the most comfort out of the headset, you will likely want something that offers improved balance and better ergonomic support.

Oculus plans to offer an Elite Strap for $49, which provides a more comfortable and ergonomic headband for Quest 2, as well as a version of the Elite Strap with a built-in battery pack for $129, which allows for extended playtime and also acts as a counterweight that should help balance the weight of the headset better.

Along with the Elite Straps, Oculus is also offering a protective carrying case designed for Quest 2, which has enough room for the headset, two Touch controllers, charging cable, and power adapter. It also fits both versions of the Elite Strap. The case retails for $49, but it also comes bundled with the Elite Strap with battery together at the $129 price.

Oculus will also sell a Fit Pack for $39, which will include two interchangeable facial interfaces for Quest 2 to fit a wider or narrower face shape and different size heads. The Fit Pack will also come with a pair of ‘light blockers,’ which are black plastic rings that snap in beneath the lenses to block light from entering through the small gap at the bottom of the headset and helps users to stay fully immersed in the virtual world when using the headset.

In addition to the first-party accessories, Oculus has partnered with several other companies to offer even more third-party accessory options for the Quest 2. The Logitech G333 VR In-Ear headphones with a custom-length cable and straps will retail for $50, and the Logitech G Pro Gaming headset, which is an over-the-ear headset with premium audio components, will go for $100. Both are officially licensed as headphone audio solutions for the Quest 2.

And for those looking for alternative facial interfaces and foam replacement sets for the Quest 2, the company has also teamed up with VR Cover. The facial interface and foam replacement set from VR Cover is priced at $29 and designed to help improve comfort and hygiene, making it easier to keep your headset clean. You can check out all the new accessories for Quest 2 on the official Oculus website.

Every Game Announced at Facebook Connect for Quest and Rift Platform