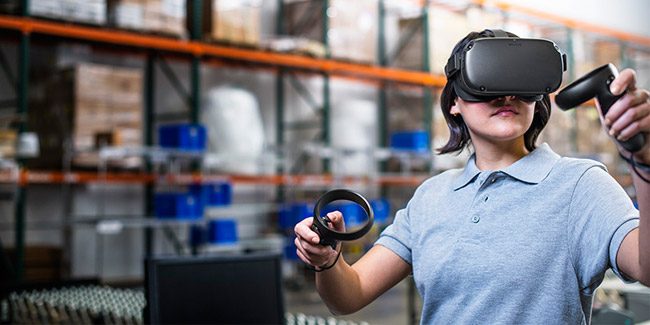 During F8 2019 this week Oculus’-parent company Facebook announced that the company is launching an enterprise edition of the Oculus Quest, as part of its newly revamped Oculus for Business program.

The new Oculus for Business will expand the initiative later this fall to include the new standalone Quest headset alongside Oculus Go, while the Rift S, will also be available in volume for businesses to purchase, however, it seems the company is primarily focused on offering its ‘all-in-one’ VR solution to the enterprise market.

“Oculus for Business is aiming to simplify enterprise VR through a holistic approach designed especially for large-scale deployments,” says Oculus in a company blog post. “This includes a dedicated software suite offering device setup and management tools, enterprise-grade service and support, and a new user experience customized for business use cases.” Oculus has stated that the company is also working closely with leaders in enterprise IT and services to develop ways to integrate VR alongside the workflows and services that businesses already use.

Oculus will be offering the Oculus Quest enterprise hardware bundle for $999 and has 128GB of storage, while a 64GB version of the Oculus Go will be priced at $599. Each Oculus for Business hardware bundle purchase will include an enterprise warranty with full software access and support for one year. After the first year, support and software access is available for an annual fee of $180 per headset.

Several major companies are already on board taking advantage of Oculus for Business program, including DHL, Johnson & Johnson, Farmers Insurance, and ExxonMobil, just to name a few. Oculus says they plan to announce additional partnerships and details as it gets closer to launching the new Oculus for Business in the fall.

Businesses interested in the new program can visit oculusforbusiness.com for more information to get started.