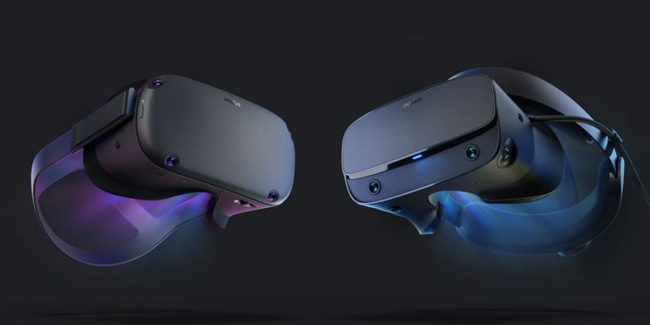 Today, during its F8 developer conference keynote, Oculus’-parent company Facebook announced that both the standalone Oculus Quest headset and the new Oculus Rift S headset will launch on May 21st, and are available for pre-order starting today.

The Oculus Quest is the company’s first standalone VR headset with six degrees of freedom (6DOF) inside-out tracking, meaning it does not require any external sensors or need to rely on a PC to deliver an immersive and completely untethered virtual reality experience. The Quest is available at two price points, depending on the storage size you choose—$399 for 64GB, and $499 for 128GB.

As for the Oculus Rift S priced at $399, it’s designed to replace the original Rift as the next iteration of the company’s flagship PC-powered VR headset, featuring improved optics and a decent bump in resolution. While the Rift S still requires to be tethered to a PC, it offers far superior graphics quality and performance over the Quest headset.

“Our first all-in-one VR gaming system, Quest delivers the freedom of completely untethered movement in VR. For those with a Windows 10 PC and graphics card suited to PC gaming, Rift S gets you into the most immersive content that VR has to offer. Choose the headset that best fits your needs,” Oculus says in a company blog post.

Both the Rift S and Quest headset make use of Oculus’ Insight tracking technology, which is capable of translating a user’s movements into VR no matter which way they are facing and provides a full room-scale tracking while eliminating the time-consuming hassle of setting up sensors around the playspace. Rift S and Quest also share the same newly redesigned Touch controllers, which are tracked by the built-in camera sensors on each headset.

The Rift S will play all of the standard Rift titles that you would expect. And Quest is said to launch with more than 50 VR titles, including many popular games which will be ported over from Rift—such as Beat Saber, Robo Recall, Superhot VR, Angry Birds VR, Creed: Rise to Glory, Dead and Buried 2​, Job Simulator, Tilt Brush and many more.

Pre-orders for both the Quest and Rift S headset are available now at oculus.com, as well as through Oculus’ retail partners like Amazon, Best Buy, Newegg, Walmart, and GameStop in the US, and Currys PC World, FNAC, MediaMarkt in the UK and EU. Orders are expected to ship by May 21st when the two headsets are released.