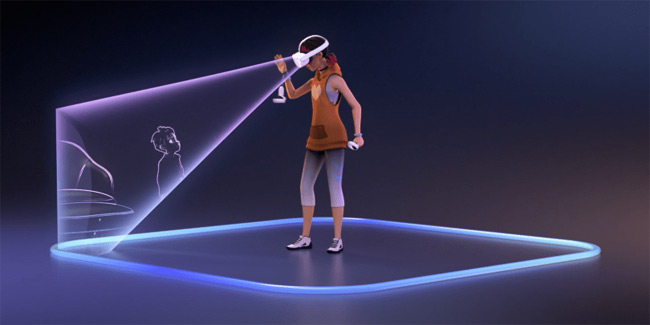 Meta (formerly Facebook) announced that the latest set of features in software update v34 is rolling out for the Quest platform starting today. Among these new additions comes a significant upgrade to the Guardian system to keep users safe while in their VR playspace with a feature called ‘Space Sense’.

In an official Oculus blog post, Space Sense is an experimental new feature that enables you to see when a physical object, person, or large pet might have entered within the established boundary of your passthrough guardian zone.

These intruding objects and things detected within the playspace boundary will appear highlighted in your headset as a ghost-like silhouette surrounded by a pinkish glow. Space Sense is still actively being worked on to improve its overall capability, so for now, it will be available to users under the ‘Experimental Features’ tab in the Quest settings.

In addition to Space Sense, the new v34 software update for Quest introduces support for push notifications in VR from Android phones, allowing users to check texts and mobile app notifications without needing to remove their headset. It also brings improved voice commands, making them more versatile and capable of handling everyday tasks for a user’s hands-free experience. You can find a complete list of current voice commands here.

Lastly, the company shared a quick update regarding its Passthrough technology. Earlier this year, Meta provided developers access to its experimental Passthrough API, allowing them to start creating mixed reality experiences for the Quest platform. And soon, with the upcoming Passthrough SDK release, the company says developers will be able to publish their mixed reality apps and experiences to both the Oculus Store and App Lab.