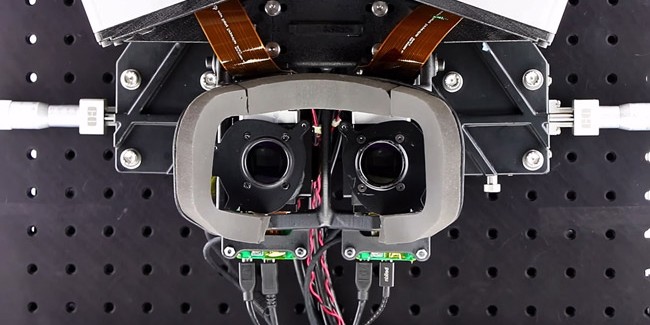 Oculus Research, the R&D division of the company announced a new and “groundbreaking” display technology that they are calling ‘Focal Surface Display’, which could dramatically improve the visual clarity and depth of focus in virtual reality for a more natural viewing experience.

The issue with today’s VR headsets is that because the display is fixed at a set distance relative to our eyes, they do not allow our vision to focus naturally on virtual objects at varying depths. In the real world, when our eyes focus on an object everything else around it blurs and drops out of focus—essentially creating a depth-of-field effect also commonly known as ‘bokeh’ in photography. VR display systems currently are not capable of producing this effect properly and, as a result, areas and objects within the virtual scene are incorrectly blurry.

The solution Oculus is working on is intended to resolve the focusing issue and aims to closely replicate how our eyes work in real life. It also has the potential ability to let users who wear corrective lenses experience VR more comfortably without the need for their prescription glasses.

As Oculus describes it: “Focal surface displays mimic the way our eyes naturally focus on objects of varying depths. Rather than trying to add more and more focus areas to get the same degree of depth, this new approach changes the way light enters the display using spatial light modulators (SLMs) to bend the headset’s focus around 3D objects — increasing depth and maximizing the amount of space represented simultaneously.”

While the technology is still in its early stages of development and not expected to appear in the Oculus Rift anytime soon, it’s exciting to see this kind of innovation and research progressing forward to improve the overall viewing experience in VR and AR, as well. Oculus Research will be presenting its published work on the focal surface display at the upcoming SIGGRAPH conference this July.