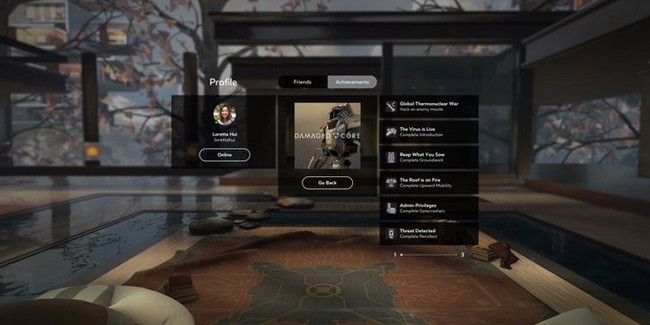 Today, Oculus announced a key feature added to its Oculus Home platform that will allow all users to gain a sense of accomplishment in their virtual reality experiences.

Over the next few weeks, Oculus will begin rolling out “achievements” for the Rift and Gear VR—starting with Minecraft, Anshar Wars 2, and Hitman Go, with more other titles added soon in the future. Users will be able to unlock achievements and will be able to see what achievements their friends have also unlocked. However, new privacy settings will give users the option to choose whether or not they want to share that information.

According to an official statement by Oculus: “Starting today, Oculus will begin rolling out achievements on Gear VR and Rift. Now, people will be able to track their progress against unlocking achievements in an app, browse what friends are up to in VR, and discover new apps friends are playing.”

The use of achievements in games by developers on similar platforms like Xbox Live and the PlayStation Network is known to add a unique layer of value and certain aspects of replayability to a gaming experience by tapping into a gamer’s competitive spirit to play through a level and discover new challenges that will ultimately reward them for their effort. Unlocking an achievement, for many gamers, is like wearing a badge of honor. It’s pretty satisfying to show it off once you’ve earned it.

As consistent updates and improvements keep coming to Oculus Home, the new platform is definitely beginning to take shape and build upon a flexible and feature-rich foundation that will hopefully keep Rift and Gear VR users feeling right at ‘home’ for a very long time. Good luck with collecting all those achievements!