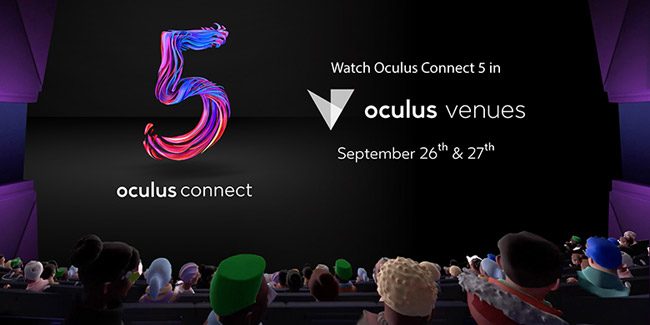 This year’s fifth annual Oculus Connect developer conference is just over a week away and is one of the most highly-anticipated events of the year for the VR community. For those who won’t be able to attend Connect this year, don’t worry, you’ll still have a chance to enjoy the conference in an immersive way right from the comfort of your own home.

Oculus has announced that it will offer a VR live stream in Oculus Venues, so you can experience the keynotes and all the eSports action alongside other fellow fans in the virtual crowd, using Oculus Go and Gear VR headset.

The VR livestream is set to begin at 10am PT on September 26th with the OC5 opening keynote, including all the latest VR and developer news. This will be followed by the eSports competition starting at 12pm PST, all leading up to the Onward Grand Finals at 6pm PT. The next day, September 27th, Oculus’ chief technology officer John Carmack will take the stage to deliver his signature unscripted keynote, and then catch all the eSports action of Echo Arena.

Oculus this year has partnered with immersive content company Supersphere to produce the VR livestreams for Oculus Connect. “We’ve streamed a fair number of different types of live events in Venues, like concerts, comedy nights, and sports, but OC5 brings us both live keynotes and esports, which are new for us,” says Oculus Product Manager and London Site Lead Mike LeBeau in a statement. “Each new event creates new challenges and learning opportunities for us, as we try to capture the right vibe, get the right framing and viewpoints, and really convey the ambience of the real-world event in Venues.”

“For the keynotes, we’ll focus on switching live 180° cameras on the speakers, along with graphics integration,” said Lucas Wilson, Supersphere’s Founder & Executive Producer. “The esports tournaments will blend live cameras and multiple gaming inputs. We’ll also debut brand-new technology that creates immersive outputs from the game engines themselves, for a true 180°/360° observer view of the gameplay. This is the first time that viewers will be inside this rich, more immersive look at gameplay. We worked closely with the talented teams at Facebook, Oculus, and ESL to build a complete set of immersive environments that fans will love.”

Oculus Connect 5 will be held next week from September 26th-7th at the McEnery Convention Center in San Jose, California. Visit the official Oculus Connect website to view the full schedule.