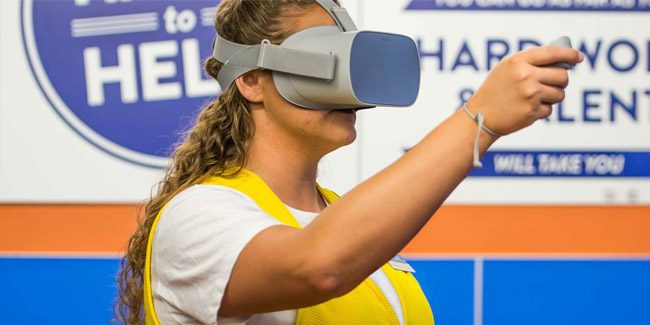 Walmart, the world’s largest retailer, announced today that it will use Oculus Go standalone headsets in partnership with STRIVR to train over one million of its employees across all the stores in the U.S.

By the end of the year, Walmart will distribute more than 17,000 Oculus Go headsets to its stores nationwide for employee training—four headsets going to every Supercenter and two headsets to every Neighborhood Market and discount store. Currently, the company has more than 45 activity-based learning modules using software provided by STRIVR that is designed to help associates gain confidence in their job roles and improve retention. Walmart plans to use the Oculus Go headset to train Walmart associates in key areas, such as new technology, compliance, and “soft skills” like empathy and customer service.

Recently, over the summer a pilot test was conducted in 10 Walmart stores utilizing VR technology as an immersive way to train associates on how to operate its new Pickup Tower units, which is the company’s latest high-tech innovation that allows customers to pick up store items purchased online through what is described as a ‘giant vending machine’.

“The great thing about VR is its ability to make learning experiential,” said Andy Trainor, Walmart’s senior director of Walmart U.S. Academies. “When you watch a module through the headset, your brain feels like you actually experienced a situation. We’ve also seen that VR training boosts confidence and retention while improving test scores 10 to 15 percent–even those associates who simply watched others experience the training saw the same retention boosts.”

“Walmart was one of the first companies to benefit from VR’s ability to enrich employee education, and its applications will only grow from here,” Oculus business partnerships head Andy Mathis said in a statement. “What makes it so compelling is that costly, difficult, or otherwise impossible scenarios and simulations become not only possible, but immediately within reach.”

Walmart’s VR employee training program is said to kick off next month, as Oculus Go headsets begin rolling out to all of its 4,500-plus retail locations across the country.