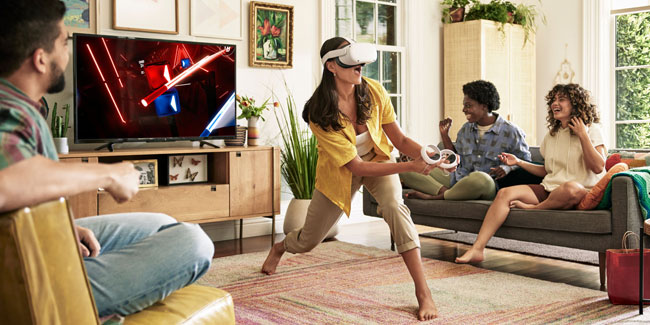 During Meta’s quarterly earnings call, the company revealed that users had spent more than $1 billion on VR content through the Quest store. A significant milestone since the platform launched in 2019.

While the company did not offer any specifics on actual sales figures for its Quest 2 headset, Meta CEO Mark Zuckerberg said it’s seeing “real traction” on the hardware front with the Quest 2 platform. And now, with more than $1B spent on Quest store content, it’s helping virtual reality developers grow and sustain their business.

“We had a strong holiday season, and Oculus reached the top of the App Store for the first time on Christmas Day in the US,” Zuckerberg said. “We’re working towards a release of a high-end virtual reality headset later this year, and we continue to make progress developing Project Nazare, which is our first fully-augmented reality glasses.”

Meta’s Director of Content Ecosystem, Chris Pruett, shared further details via Twitter about the $1 billion spent by consumers, noting that eight VR titles on the Quest store have surpassed $20 million in gross revenue, along with 14 titles exceeded $10 million, and 17 are now over $5 million. Additionally, over 120 titles have generated revenue well into the millions on the platform, which Pruett points out is 2x more than last year’s figure to reach that milestone.

Meta did not offer specifics on how the $1 billion figure breaks down among its distribution channels, but it’s likely to include games, apps, and DLC sold through both the official Quest store and App Lab.

Among other details announced in Meta’s quarterly earnings call, the company shared its financial results from Reality Labs, revealing the segment responsible for its VR and AR efforts generated $2.2 billion in revenue, compared to $1.1 billion in 2020. This was in part due to strong Q4 2021 results from Quest 2 holiday sales.

Oculus Quest Rebranded to Meta Quest, and Not All Fans Are Happy