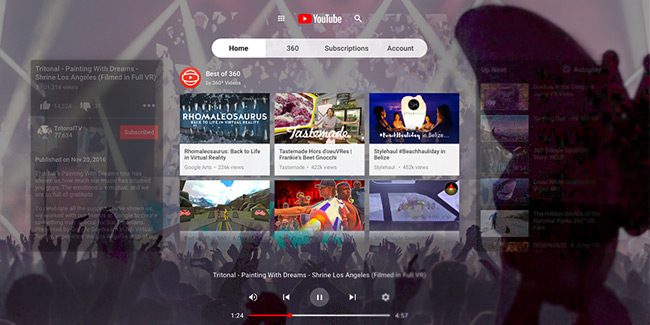 Oculus has announced that Google is bringing its popular YouTube VR app to the highly-anticipated Oculus Quest standalone headset, which is set to release this Tuesday, May 21st.

The dedicated YouTube VR app, first launched back in late 2016, and since then has become available across all major VR headsets—including the Oculus Rift and Go, and Samsung’s Gear VR. Now, with more than 1 million VR videos and experiences on the video streaming platform, new Oculus Quest users will be able to access a huge and diverse library of immersive, 360-degree, and 180-degree videos alongside traditional 2D content.

“YouTube is a platform traditionally centered around 2D, but there’s also a lot of energy and interest in emerging formats such as 360° and VR180 content,” said YouTube VR Product Lead Kurt Wilms in an Oculus blog post. “We know that both creators and viewers on YouTube are excited about exploring non-traditional mediums of storytelling.”

“From becoming a part of the Brave Wilderness crew on their rainforest adventure to taking a tour of actress Madelaine Petsch’s trailer in Los Angeles, we’ve seen creators embrace VR to create new immersive videos that make their community feel closer and more present.”

The addition of YouTube VR to the Oculus Quest platform, along with an already impressive lineup of launch titles, including Beat Saber, Dance Central VR, Dead and Buried 2, Superhot VR, and Google’s Tilt Brush ensures that there will be plenty of immersive content for users to experience on day one when Quest is released next week.