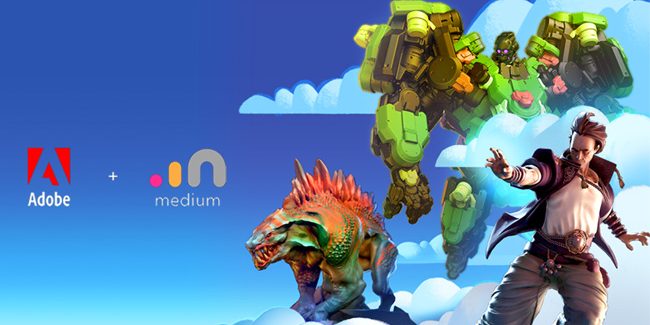 Oculus Medium was first launched back in 2016 alongside the Oculus Touch motion controllers, and it all began as a way for the company to explore what VR can do for applications beyond gaming, and give artists a new way to create. To date, Medium has been widely used by creative professionals across the entire industry—including game developers, feature film concept artists, VFX artists, makers, and more. And now with Medium joining one of the world’s leading creative software companies, Adobe, “Medium will be able to better help creators thrive and shape their 3D visions than ever before,” Oculus stated.

In a company blog post announcing the acquisition, Sébastien Deguy, VP of 3D and Immersive Content at Adobe, says that “Medium has been a beacon of creativity in the VR space, pushing creative and technical boundaries of 3D modeling. The creative tool enables users to sculpt, model, and paint in an immersive environment – to easily create characters, objects, environments, expressive works of art, and more. The integration of Medium’s tools and technology will greatly contribute to our 3D and immersive strategy.”

“During my time at Allegorithmic (acquired by Adobe in January 2019), we’ve always looked up to Medium and seen shaping as something we’d love to tackle,” Deguy added. “The redoubled investment of Adobe in the 3D and AR space finally allowed us to join forces and bring our complementary talents together. The Substance and Medium teams are ready to work together on the next generation of 3D tools.”

According to Oculus, the acquisition of Medium by Adobe marks an important milestone for the VR community, as it demonstrates VR’s maturation and value in the realms of productivity and non-gaming use cases. Oculus notes that this is “a new chapter” for the immersive 3D sculpting tool, and says that users should “stay tuned for more features, improvements, and other developments coming from Adobe in 2020 as Medium continues to evolve.”