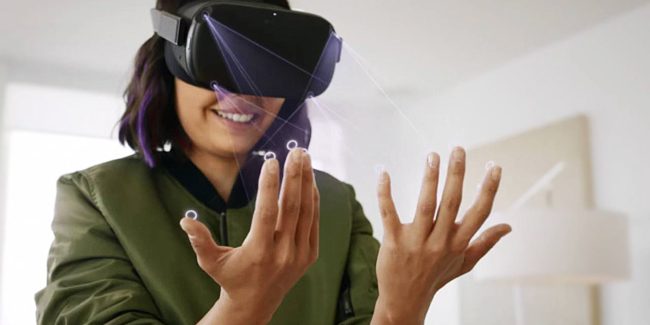 Oculus has announced that it is rolling out its much-anticipated hand-tracking feature for its Oculus Quest standalone virtual reality headset, starting this week.

Hand-tracking support for Quest was first announced earlier this year at Oculus Connect 6 and was initially expected to arrive in early 2020, but now Oculus has revealed that it is launching the feature just in time for the holidays as part of the latest Quest v12 software update.

Once the software update is installed, Quest users will be able to turn on hand tracking in the ‘Experimental Features’ menu, and then will be able to use their hands to navigate and interact within Quest’s Home interfaces such as Library and Store, as well as first-party Oculus apps like the Oculus Browser and Oculus TV.

Oculus calls hand-tracking support on Quest “an early consumer feature” that will soon start rolling out to developers as SDK next week, allowing them to start integrating hand-tracking functionality to third-party games and applications.

“We hope hand tracking will make VR more approachable for newcomers to try by removing the need to learn controller functions,” Oculus says. And for those who own Quest, when the hardware melts away you can be fully immersed in the magic of VR while connecting with others in a seamless, intuitive way.”