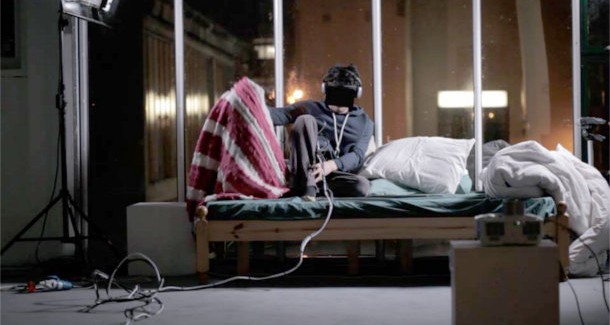 With the use of pre-recorded video footage taken from a first-person perspective, Farid will engage in various social activities like going to a bar, having dinner with friends, and even interacting with a girlfriend all within the virtual world. This project is known as Seeing-I.

As a performance artist, Farid is pushing the limits of self-identity vs. reality. While he is immersed within the life of a stranger using the Oculus Rift, Farid wants to determine if it’s possible for him to lose his own sense of personal identity, and start believing the stranger’s life as his very own.

Throughout the 28 day experiment, Farid will be assisted by a few of his handlers to help him with essential living tasks, and attempt to eat, drink, shower, and even use the bathroom at the same moment the “other” person experiences in life during the pre-recorded video.

Farid has turned to Kickstarter to raise funding to make his artistic experiment a reality and be showcased as a feature-length documentary.