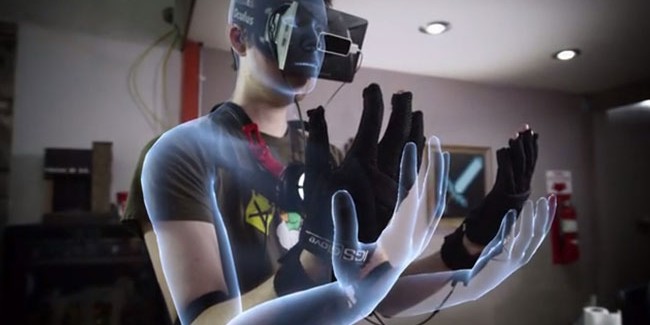 The Oculus Rift headset has literally changed the game by delivering a platform that makes you feel you are actually inside a virtual world. But, while the headset achieves an amazing sense of presence as you look around inside VR, it doesn’t let you interact with your body to give you a natural, and truly immersive experience. There are currently a number of companies trying to develop the best solution to address this issue, and now a new California-based company by the name of Control VR believes they have the answer we’ve all been waiting for.

Control VR has launched a Kickstarter campaign for its wearable motion and gesture control technology, a glove-like system that consists of tiny sensors that were developed by DARPA for military purposes. These advanced sensors include—three accelerometers, three magnetometers, and three gyroscopes that are capable of detecting small inertial movements to track your arms, hands, and even fingers with far more accuracy than anything the public has seen before according to Alex Sarnoff, co-founder and CEO of Control VR.

The potential use of this technology goes beyond just gaming and can work for a wide variety of applications—such as 3D motion capturing, design, music composition, medical rehabilitation, and even controlling aerial robotic drones. The possibilities are limitless, and it will be up to developers to come up with unique, and innovative applications that take full advantage of the Control VR system.

Control VR’s funding goal is set at $250,000. A pledge of $350 will get you a single-arm system complete with 10 inertial sensors, and the SDK (software development kit) with tutorials. While a $600 donation buys you the two-arm system complete with 19 inertial sensors, including the SDK software and tutorials. Each kit also comes with 10+ games and demo applications. The company is expected to ship its Control VR systems to all backers who pledged $350 or more by December of this year, with the second wave of orders arriving in January 2015.

While the campaign is underway, you can pledge at the Kickstarter page right here.