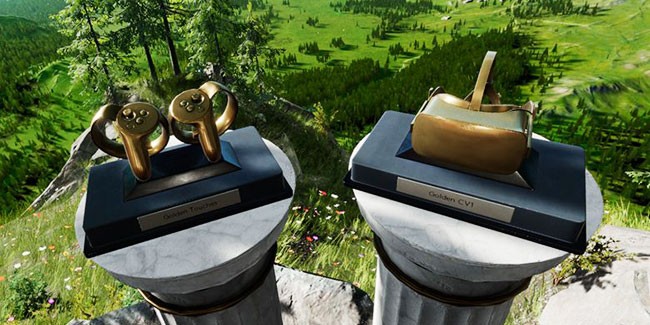 Oculus has come a long way since its Kickstarter days, and the company has a lot to celebrate. So, in honor of all those in the Rift community who were there and have supported Oculus’ vision early on, the company is offering to show its appreciation in a simple yet special way that can be displayed and treasured forever inside of the virtual world.

As part of the Rift’s two-year anniversary, Oculus has announced that it started rolling out special edition trophies to everyone that had pre-ordered an Oculus Rift headset and/or Touch motion controllers along with DK1 and DK2 backers. The trophies can be found in the ‘Achievements’ section of your inventory on Oculus Home.

To all the VR visionaries that backed DK1, DK2, or pre-ordered Rift and/or Touch early on—thank you! As a token of our appreciation, we’ve created trophies for your Oculus Home. Find them now in the Achievements section of your inventory. https://t.co/SqeSTUiFKU pic.twitter.com/Kp31qxWatG

In addition to the Rift’s two-year celebration, Oculus is offering some pretty deep discounts on games in the Oculus Store, as well as a shot to win part of a $28,000 prize pool that includes prizes like Oculus Store credit and a brand-new PC. There is even a chance to be awarded a ‘Golden Account’, which unlocks 100 Oculus Rift games for free.

This week’s ‘Rift Gold Rush’ event starts off today (March 31st), and players simply need to jump into a multiplayer match on Brass Tactics from 1:00–2:00pm PT for a chance to win. Oculus says more similar events will be running over the course of the next few weeks, so be sure to keep an eye out for more ways to participate in the next one.