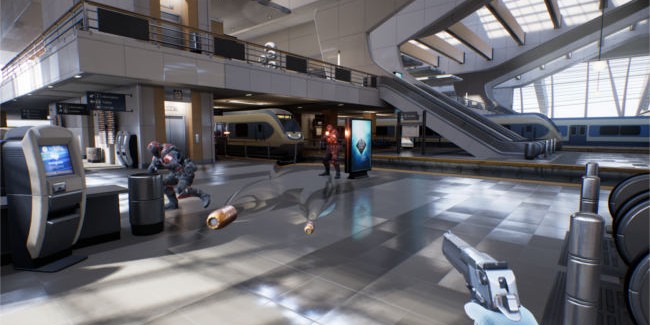 During the Oculus Connect 2 conference in Hollywood, California today, Epic CEO and founder, Tim Sweeney took to the stage to show off the company’s newest VR demo, Bullet Train.

Bullet Train is a VR first-person shooter (FPS) that appears to be Epic’s follow-up to last year’s impressive Showdown tech demo developed for the Oculus Rift virtual reality headset. This time around the company takes it a step further with Bullet Train by taking advantage of the unique capabilities of the Oculus Touch motion-sensing controllers.

“Using the Oculus Touch controller for locomotion, we’ve built a world-scale VR gunfight experience with gameplay that weaves in and out of bullet time,” said Sweeney.

The demo takes place inside of a hostile train station, where the player must barrel through a number of armored, futuristic soldiers in close-quarter combat, and face an intense robotic boss battle.

According to Epic, “Thanks to Unreal Engine technology and the Oculus Touch motion controllers, you can physically interact with an array of weapons, from guns to grenades to missiles, and even feel them through haptic feedback.”

Check out the Bullet Train video above to see the playable demo in action. Stay tuned for more updates for the Oculus Connect 2 conference, as it develops.