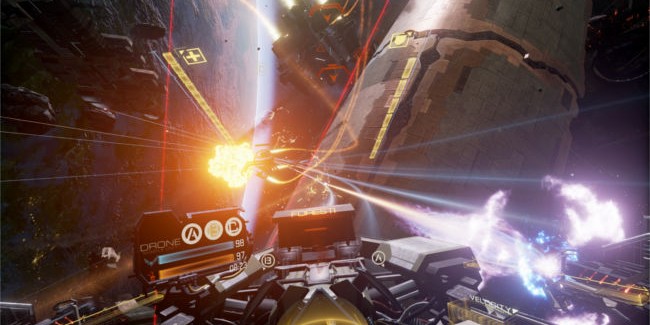 Oculus and CCP Games, the developers of EVE: Valkyrie, announced the exciting news that all pre-orders of the upcoming consumer Oculus Rift virtual reality headset will come bundled with a free copy of the game at launch in early 2016.

EVE: Valkyrie has been in development since 2012, and is regarded as one of the most intense, and immersive multiplayer space shooter experiences designed specifically for the VR platform. Players will be fully immersed in the cockpit of their very own, heavily armed spaceship fighter, as they dog fight their way through epic team-based space battles.

“EVE: Valkyrie is one of the most anticipated virtual reality games, and one of the first true VR games to go into development,” Oculus founder Palmer Luckey said in a statement.

“It perfectly captures the promise of immersive gaming, shooting you into a sci-fi adventure as you pilot a spaceship in search of combat. Battling your friends (and enemies) in multiplayer space dogfights is the ultimate VR thrill, and we’re excited to partner with CCP to bring this experience to Rift owners everywhere.”

While no word yet on how much the consumer Rift will cost when it ships in Q1 of 2016, it’s good to know early VR adopters will have a compelling game, like EVE: Valkyrie that showcases the power of the Rift on Day 1.

Oculus Audio SDK Officially Out of Beta with Release of v1.0.1