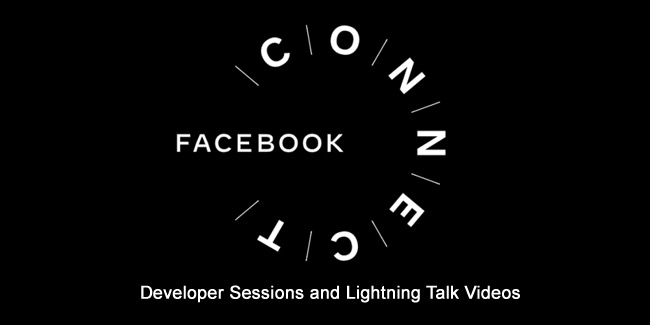 In case you missed this year’s annual Facebook Connect AR/VR conference, you can watch the uploaded developer session videos and a series of lightning talks from the event here below:

‘Calling all AR/VR developers! Join Oculus leads at this year’s developer super session for a complete look at all the new and recent developer solutions launching including new development tools, improvements to integrations, and so much more – in addition to starting you off successfully for the rest of Facebook Connect.’


The State of Social Impact VR

‘Creators of three highly influential social impact VR experiences will discuss accomplishments and challenges as well as what success looks like to them.’

‘Live events in VR are more important now than ever, and many options exist for performers, creators and developers. Learn about the formats and platforms available to bring engaging and exciting live performances to the VR audience.’

‘Storytelling has been around from the time man first painted on a cave wall and has evolved into different formats ever since. Today, VR emerges as a new form of storytelling for creators. Goro Fujita shares his experience in this new format and will create in real-time, showing how he uses VR animation and illustration tool, Quill, to bring ideas to life.’

‘Come learn about the latest advances in Quest development with Unity in this joint talk with Oculus and Unity engineers. Specifically, we’ll be covering Vulkan API, the XR Plugin system, development iteration time improvements, and the Universal Render Pipeline.’

‘From test groups to play testing, join us as we help you maximize user experience and talk through promotional opportunities with an eye on helping customers feel immersed in your game using Mixed Reality Capture and more. Also learn about new marketing tools, ways to monetize your apps and new distribution paths (that won’t need Store approval!)’

‘Announcing the next generation of development tools for Oculus! In this talk we’re introducing the brand-new Oculus Developer Hub and covering the many ways it can accelerate your workflow.’


New World of Possibilities with Unreal and Oculus

‘In this session, you’ll learn all about major improvements to Oculus integrations for UE4 from Oculus and Epic Games engineers. Some topics to be covered include iteration time improvements, new sample code, and a sneak peek into the future of the Unreal Editor.’

‘The ultimate goal for VR is fully immersive computing in the round. In this talk, we will cover the ways VR is supercharging people’s productivity at home and at work. We will talk about the virtuous cycle between enterprise and consumer productivity, and what the Oculus Store and Oculus for Business offer today. Don’t miss a sneak peek into new tools that will help turbocharge this trend in the future.’

‘VR provides a unique medium for people to connect, defying distance and being present with friends, family and their community. We’ll walk through updates to the Oculus social platform, including new tools to help people connect in apps and new ways to unlock personalized and engaging social presences.’

‘こちらのセッションは日本語（英語字幕）で配信され、今後の日本市場のへのアプローチ、課題、改善案等について話します。その他、日本の開発会社様向けのベストプラクティスとなります。| This talk, delivered in Japanese, is an overview of our approach to the Japanese market and contains best practices to maximize the success of Japanese developers.’


For more coverage on the latest Oculus news and updates, keep checking back with OVRnews. Stay tuned!