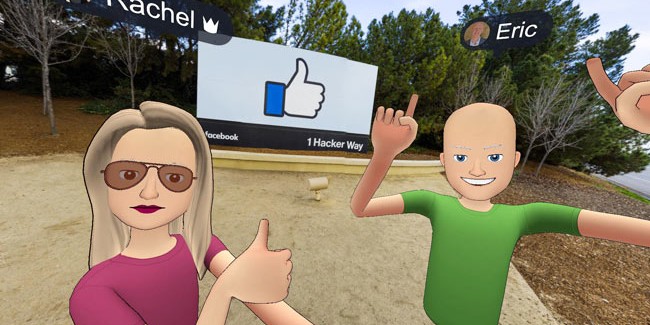 Oculus’ parent company Facebook has announced that Eric Romo, the CEO and founder of AltspaceVR, is joining its social VR team as a Product Director, where he will be helping the company explore new, innovative ways to connect people and communities together in virtual reality.

“Eric is a pioneer in the social VR space who shares our vision of building virtual reality with people at the center,” said Rachel Rubin Franklin, Facebook’s head of social VR, in a post. “He’s spent years building virtual communities to bring people together around common interests and compelling content.”

“With lots to tackle in 2018, I’m thrilled to have Eric on board,” she continued. “VR has such immense promise to connect people in new ways, and it’s only the beginning.”

Romo, founded AltspaceVR back in January 2013. However, despite its early success, the company ran into some financial difficulty, which nearly resulted in a complete shut down of the beloved social VR app last year. That was until Microsoft came to the rescue and decided to acquire the company for an undisclosed amount.

Romo shared some of his thoughts in a post regarding the announcement of his new role at Facebook:

“As I look back at my journey with AltspaceVR, I couldn’t be prouder of what we accomplished. We built one of the first and most vibrant places to meet in VR — starting before the first consumer headsets even shipped! But it’s really the community of passionate people that has grown around AltspaceVR that amazes me most, and continues to confirm my belief that being together with others in VR will revolutionize the way we connect with each other.”

“It wasn’t an easy decision,” he continued, “but I left AltspaceVR with confidence that the team is well-placed to continue pushing forward the promise of virtual communication as part of the Microsoft mixed reality ecosystem. I can’t wait to see what they’ll do next, and wish them all the best.” He went on to say, “I’m beyond excited for the opportunity to continue exploring how VR can help communities connect as a part of the Facebook team. I’m also grateful I’ll be able to keep my family’s roots here in the SF Bay Area, which was a big priority for me.”

“I‘ve been inspired by Facebook’s commitment to VR and I’m motivated by how much there is yet to do,” he added.