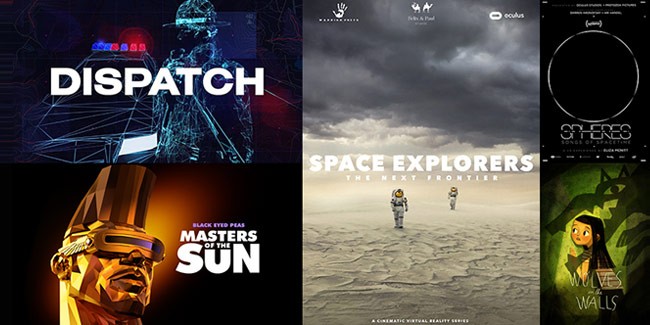 The Sundance Film Festival kicked off earlier this week in Park City, Utah, and for the fourth year in a row Oculus is there to bring the latest innovations in immersive VR storytelling to the festival.

This year the company will be debuting five Oculus-funded virtual reality experiences at the festival’s New Frontier exhibition, which is a section of Sundance dedicated to showcasing some of the most innovative and experimental work by creators who are pushing the artistic development in the mediums of VR, AR, MR, and AI.

“We’re thrilled to debut five projects that span the full range of artistic expression at Sundance this week, though we’re even more excited by the progress these pieces represent—and the work ahead in the years to come,” Colum Slevin, head of experiences at Oculus, wrote in an official blog post. Below are the five projects debuting this week:

Written and directed by Edward Robles of Here Be Dragons, Dispatch follows a small-town police dispatcher (Martin Starr, Silicon Valley) as he faces an all-night crime spree. The experience takes you inside the dispatcher’s perspective in this episodic, audio-based miniseries. The first three episodes launched on Rift and Gear VR in November, and the finale will launch on the Oculus Store January 25 following its world premiere at Sundance.

Masters of the Sun

Launching today for Gear VR, Masters of the Sun is presented by will.i.am and The Black Eyed Peas. It takes place during the ’80s when ancient and modern forces of evil started destroying black communities. Vocal talent including Rakim, Queen Latifah, KRS-One, Jason Isaacs, Slick Rick, and comics industry legend Stan Lee tell the story of mobilization and reclaiming their city, fighting back against the evils of drugs, crime, and discrimination.

The latest project from Felix & Paul Studios, Space Explorers lets you reach new heights through the power of VR. Created in partnership with NASA, the experience follows their astronauts as they prepare to launch into space. Space Explorers is coming to Oculus in 2018.

The first chapter of SPHERES, called “Songs Of Spacetime,” is debuting at Sundance. SPHERES is a three-part series that transports viewers into the deepest pockets of the Universe, bringing to life future worlds and exploring oneness with the cosmos. SPHERES is created by Eliza McNitt and will launch on Rift in 2018.

Wolves in the Walls

From the team behind the Emmy Award-winning project Henry comes Wolves in the Walls, a gorgeous, interactive adaptation of Neil Gaiman and Dave McKean’s haunting work brought to life in VR. Wolves in the Walls is coming to Oculus in 2018.

For more information, and a full list of the VR entry’s into this year’s Sundance Film Festival’s New Frontier click here.