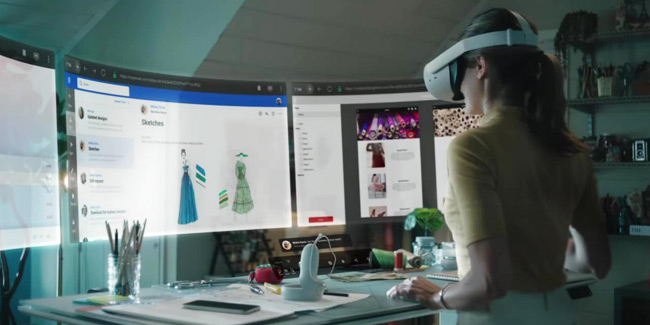 Facebook continues its push to take virtual reality beyond just gaming. Alongside plenty of new and exciting game and hardware announcements at this year’s Facebook Connect event, the company revealed Infinite Office, a new set of productivity-focused features designed to create a virtual office space anywhere, anytime on the Quest platform.

With Infinite Office, you can put on the Quest 2 and be instantly transported to a virtual workspace environment that you can make as large or small as you want it. You will also have the ability to add multiple virtual monitors, all of which can be customized to fit your individual needs, and capable of streaming programs from your PC in real-time.

As part of its early experiments, Facebook says it has already begun incorporating Infinite Office with third-parties such as Spatial, a collaborative augmented reality (AR) platform that lets users collaborate with colleagues in a virtual meeting environment. Here you can see how Spatial works with Passthrough to enhance a virtual meeting below.

Additionally, Facebook also announced that it has partnered with Logitech to bring a physical keyboard into VR. Starting with the Logitech K830, this keyboard will be recognized, tracked, and rendered inside of the headset so users can actually type and easily input text in virtual reality while working inside the Quest 2.

Facebook says it plans to roll out Infinite Office as an experimental feature for the Quest 2 later this winter, and that it intends to open up these key technologies like Passthrough to developers in the months ahead.