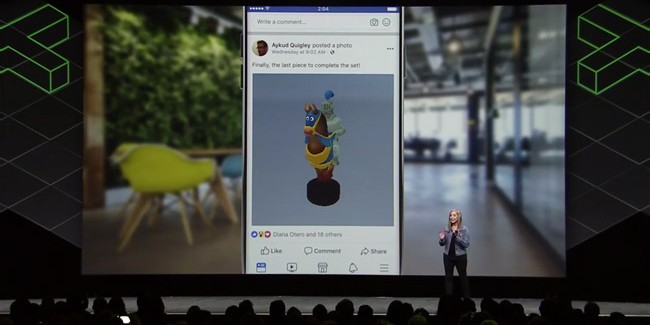 Last October, Oculus-parent company Facebook introduced a new feature to the platform that would allow users to post interactive 3D objects to their News Feed. Now, the company announced on Tuesday that it is adopting the industry-standard 3D file format (gITF 2.0), enabling artists and creators to easily share richer, high-quality 3D images.

With the adoption of gITF 2.0 comes support that includes more detailed textures, lighting, and realistic rendering techniques that can bring 3D art to life across Facebook’s News Feed, including its social VR app, Facebook Spaces.

In addition to the new file format, Facebook is rolling out new Graph API endpoints that allow developers to build 3D sharing into any third-party app and lets people easily share 3D objects or scenes directly to Facebook with just a simple click. Using the new Open Graph tag will also allow developers to make 3D content from their website automatically appear in 3D when shared on Facebook as well.

Currently, users are able to share 3D content captured with an Xperia XZ1 phone via Sony’s 3D creator app and Modo, a 3D modeling software, that has added a built-in feature to create ‘Facebook-ready’ files. For artists and creators making 3D content in VR, Facebook says you can share 3D objects to Facebook directly from the Oculus Medium web gallery, and soon support from Google’s Poly and other 3D programs will be available.

“In the future, we envision a seamless digital world where people can share immersive experiences and objects like these across VR, AR, and Facebook News Feed,” Facebook’s Product Manager Aykud Gonen wrote on the company’s developer blog. “To get there, we’ll work on supporting even higher-quality 3D models, enabling interactive animations, and bringing 3D content into the real world using AR. This is only the beginning, and we look forward to seeing the ecosystem of 3D content grow on Facebook as people, developers, and artists contribute their creativity.”

Facebook says that they hope by providing these tools it will help more artists, developers, and businesses to share their creations so that people can discover and enjoy rich 3D content right from their News Feed and inside VR.